As the European Commission’s proposal to ban imports of Russian oil languished during May, it became clear some kind of compromise would be necessary to overcome the objections of Hungary. Along with neighbours the Czech Republic and Slovakia, the government in Budapest insisted they were too dependent on Russian oil to consider an EU Russian oil ban.

Eventually a compromise was found whereby oil from pipelines, the source for the three concerned countries, would be exempt. The ban will only apply to seaborne oil. On its face, this arrangement will exempt one-third of Russian oil imports from the ban, but because Germany and Poland have given verbal assurances they will not use the exemption and will ban all Russian oil imports, it will mean that only imports to Hungary, the Czech Republic, and Slovakia will be exempt – amounting to 10% of EU oil imports from Russia.

However, some EU countries, including Belgium and the Netherlands, were concerned that this compromise would distort the EU single market’s level playing field. Oil shipments by sea would inevitably become more expensive because they can no longer contain Russian oil. Meanwhile, continued shipments via the Southern Druzhba pipeline would be far cheaper and could outcompete the oil imports by sea – leading, perversely, to more Russian oil going to these three countries than before, with the excess going to other EU countries. This would particularly hurt oil-importing ports like Rotterdam and Antwerp.

Now, one month since the oil ban compromise was agreed, analysts say those fears are not coming to pass. “Druzhba customers should not increase their buying of Russian oil because technically there does not appear to be much spare capacity,” says Georg Zachmann, an energy analyst with the Brussels-based think tank Bruegel. Last month Hungary, Slovakia, and the Czech Republic received some 0.4 million barrels per day, he notes, which is roughly at capacity. “If this is roughly correct, then I see no big risk that these privileged refineries will be able to gain market share at the expense of other non-privileged refineries,” he says. “But of course, the operating margins of privileged refineries would substantially increase as they can sell at the higher prices their non-privileged competitors are selling.” 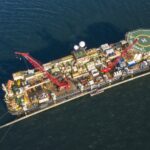 Even if the pipeline wasn’t already at capacity, the three countries will be forbidden by the legislation from letting the oil flow into the rest of the EU market. Joshua Folds, an oil analyst with Facts Global Energy, says it is true that imports to these three countries from the Druzbha pipeline will be heavily discounted when compared with importing other crudes. This isn’t just because the new import routes will be at a premium but also because there is an estimated $5-$10 per barrel in logistical costs in importing seaborne crude compared with pipeline imports.

“We do foresee Hungarian, Czech, and Slovakian refiners who receive comparably cheap Urals imports through the Druzbha pipeline operating in a better economic environment than their competitors, who will be forced to remove their Russian seaborne crude imports entirely by 4 December,” Folds says, while noting also that the disruption to trade flows is pushing the price of all crudes up. “But it is important to note that despite Hungary, the Czech Republic, and Slovakia being exempt from the ban on Russian crude imports, they are not allowed to re-export crude or any oil product they produce that is derived from Russian crude to any other countries."

He adds: “The crude imports through the Druzhba pipeline are almost entirely used in the refining sector. The continued import of Russian crude through the Southern Druzbha pipeline will therefore not affect the share of various energy sources in power generation, especially as oil-fired power stations do not make up a significant portion of European power generation.”

At the same time, he says that the oil embargo, even with an exemption on 10% of imports, will have a major effect on Russia. “Assuming by 4 December the only Russian crude imports into the EU 27 come though the Druzbha pipeline into Hungary, the Czech Republic, and Slovakia, Russian revenue from crude oil sales into the bloc will decrease by an estimated 90% – from $6.3bn in January 2022 to $0.6bn by December 2022.”

However, “despite Russia losing this revenue from the EU, it is important to note Russia will likely find buyers for its crude in other parts of the world, such as in China and India, so the aim of the bloc to remove capital from the Russian war machine may not work".

To avoid that scenario, the EU embargo also contains a ban on European companies providing insurance to ships carrying Russian oil, even if it is destined for non-EU countries. The UK plans to match that EU insurance ban, which will have a major impact since London is the centre of the global maritime insurance trade. According to the tanker research company Poten & Partners, the EU and UK insurance ban will make 90% of the world’s oil-transporting fleet inaccessible to Russia. Ships effectively cannot sail without insurance against damage to the ship or its cargo, and liability protection for any type of collision or spill.

Just as the insurance ban is taking shape in London and Brussels, Washington has quietly stepped in with concerns. According to a report last week by the Financial Times, the Biden administration is asking that the ban be softened because of fears of its effects on global energy prices. Even before the ban has taken effect, it is causing insurers to back off from covering Russian oil cargoes. A full insurance ban could make trade in Russian oil nearly impossible, removing up to 8% of the world’s crude supply from the market. The resulting supply shock could cause a major spike in global energy prices this summer – just before the US midterm elections. The economist Olivier Blanchard has predicted that the crude price could spike by up to 30% as a result of the insurance ban. The Biden administration, according to reports, is asking for Europe to water down the ban to make it very expensive to insure ships carrying Russian oil, but not prohibitively so. However, there is not yet any sign that the EU is planning to acquiesce to the US request.

It is still early days for the EU’s oil ban. The implementing legislation is still being crafted and the full ban won’t take effect until the end of this year – phased in between now and then. While nerves have been calmed about the potentially destabilising impact of allowing in some Russian oil while banning most imports, attention has now turned to the potentially destabilising impact of the insurance ban on global prices. European lawmakers will be looking for ways to make sure Russia can't easily supply other buyers with cheap oil, while also minimising disruption to global markets that could have a ricochet effect in Europe through dramatically raised energy prices.

@davekeating
Senior writer Dave Keating is a US journalist covering European affairs from Brussels, with a focus on environment and energy.
SUBSCRIBED