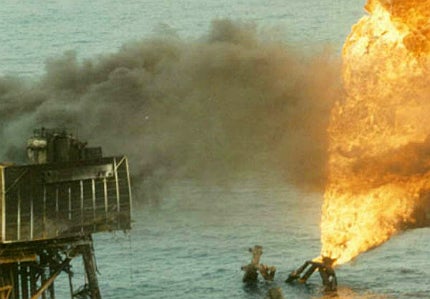 Last month, a rededication ceremony and remembrance service marking the 25th anniversary of the Piper Alpha disaster was held in the newly restored memorial garden in Aberdeen’s Hazlehead Park.

Relatives of the victims, survivors, senior figures from the oil and gas industry, politicians and representatives from the Pound for Piper Memorial Trust gathered around the now iconic memorial sculpture.

Depicting three offshore workers, it stands as a poignant and permanent reminder that the lessons learned from the tragedy – fundamental lessons that continue to inform and underpin safety best practice on the UK Continental Shelf (UKCS) to this day – must never be forgotten.

Built in 1975 and situated in the Piper oil field approximately 120 miles north-east of Aberdeen, Piper Alpha was responsible for around ten percent of oil and gas production in the North Sea, about 300,000 barrels of oil a day, more than any other platform.

At around 9.55pm on 6 July 1988, gas leaking from a faulty condensate pump ignited and exploded. Three further explosions caused by ruptures in the pipelines connecting Piper Alpha to surrounding platforms and resulting fires in excess of 700°C decimated the 14,000t platform.

In the space of just two hours, 167 offshore workers perished. Thirty of the bodies have never been recovered. Miraculously, 61 men survived, some by jumping 175ft from the rig’s helicopter deck into the sea. In terms of lives lost, it remains the worst disaster in the history of the oil and gas industry.

In 1990, the official public inquiry chaired by Scottish judge William Cullen concluded that the initial condensate leak was the result of maintenance work being carried out simultaneously on a pump and related safety valve. The inquiry was critical of Occidental Petroleum, the platform’s US-based operator, which was found guilty of having inadequate maintenance and safety procedures. To this day, no criminal charges have ever been brought against the company.

It was the second part of the Cullen Report, however, that was to have far-reaching implications for the future of process and personnel safety on the UKCS.

Based on evidence from industry experts – including 34 witnesses provided by the UK oil and gas industry trade association UKOOA (now Oil & Gas UK) – it made no less than 106 recommendations for changes to North Sea safety procedures. The UK Health and Safety Executive (HSE) was given the job of implementing Lord Cullen’s key recommendation: the introduction of regulations requiring the operator / owner, otherwise known as the duty holder, of every fixed and mobile installation operating in UK waters to submit a safety case, for its acceptance, to the HSE.

Signed into law in 1992, the Offshore Installations (Safety Case) Regulations require the duty holder to provide details of health and safety management and major accident hazard control systems on the installation, including identifying risks and reducing them as much as is reasonably practicable, providing a temporary safe refuge on board and making provisions for safe evacuation and rescue.

The Offshore Installations (Safety Representatives and Safety Committees) Regulations, which came into force in 1989, stipulated that operators must also prove they have consulted with the workforce when preparing a safety case and have made copies of the accepted document available to them.

The regulations made it incumbent upon the duty holder to revise and update the safety case throughout the full life cycle of an installation in the form of three yearly resubmissions; the legislation was revised in 2005 in part to reduce this burden, as well as improve its effectiveness.

By November 1995, a safety case for every installation in UK waters had been accepted by the HSE. It should also be noted that, in the immediate aftermath of the Piper Alpha disaster, operators spent an estimated £1bn upgrading key installation and management systems.

The Cullen Report also did away with traditional prescriptive safety legislation in favour of a more progressive ‘goal-setting’ model.

Rather than presenting operators with a fixed checklist of targets that had be satisfied in order to meet statutory requirements, Oil & Gas UK published guidelines that identified key risk areas and guidance on the procedures most suitable for controlling them. The onus was then on offshore companies to choose the best methods or equipment available to meet those requirements.

The 1990s witnessed a flurry of oil and gas industry legislation. The ‘Offshore Installation and Pipeline Works (Management and Administration) Regulations 1995’ set out requirements for the safe management of offshore installations, while the ‘Offshore Installations (Prevention of Fire and Explosion, and Emergency Response) Regulations 1995 (PFEER)’ provided for the protection of offshore workers from fire and explosion and for securing an effective emergency response.

“The Cullen Report did away with traditional prescriptive safety legislation in favour of a more progressive ‘goal-setting’ model.”

The following year, the ‘Offshore Installations and Wells (Design and Construction, etc) Regulations 1996’ were enacted to ensure the integrity of installations, the safety of offshore and onshore wells and the safety of the workplace environment offshore. Inspectors employed by the HSE were employed to enforce these rules, as well as others related to first-aid, safety representatives and committees, personal protective and display screen equipment, manual handling and safety zones.

Concerned that its earlier successes were not being sustained, the offshore industry trade associations launched the ‘Step Change in Safety’ (SCIS) campaign in September 1997 with the ambitious target of improving the entire industry’s safety performance by 50%.

The most recent SCIS initiative, in 2010, aimed to reduce hydrocarbon releases by 50% by the end of March 2013 – ultimately, the industry fell just short, achieving a reduction of 48%. Oil & Gas UK’s annual Health and Safety report published in June points to the fact that no fatalities were recorded in the past year, as well as a decrease in combined fatal and major injury rates.

Cultural revolution: Piper 25 and the future of offshore safety

Piper Alpha changed processes and personnel safety in the North Sea beyond all recognition and for all time, by giving oil and gas operators a set of practical legislative and procedural guidelines that were commensurate with the huge demands of large-scale operations in the late 20th and early 21st century.

The tragedy also led to a profound cultural shift within the industry. Safety, neglected for too long in favour of economic and operational imperatives, was propelled to the top of the offshore agenda. For a whole new generation of personnel – everyone from senior managers to graduate engineers – this embedded culture of accountability became the norm, rather than the exception.

“‘Step Change in Safety’ was launched with the ambitious target of improving the entire industry’s safety performance by 50%.”

Finally, the events of 6 July 1988 brought home to wider society the inherent dangers of upstream oil and gas production in the North Sea and worldwide. As oil and gas multinationals look to mitigate the effects of the great crew change, they must work to attract a new generation of professionals adept at working under increased scrutiny from the public, lawmakers and the global media.

All this is, of course, a work in progress. The 2010 Deepwater Horizon disaster, and its ongoing legal and environmental repercussions, was a stark reminder of the need for constant vigilance.

Speaking at Piper 25, a major three-day safety conference held at the Aberdeen Exhibition and Conference Centre in June, Judith Hackitt CBE, chair of the UK HSE, warned global oil and gas industry executives about the dangers of complacency.

“Marking the 25th anniversary of the Piper Alpha disaster is important – using this as an opportunity to reflect on how we need to get better at embedding that learning from the past,” she said.

“While the precise circumstances and contexts of major incidents differ in some respects, at heart I am left with the feeling that there are no new accidents. Rather there are old accidents repeated by new people.”