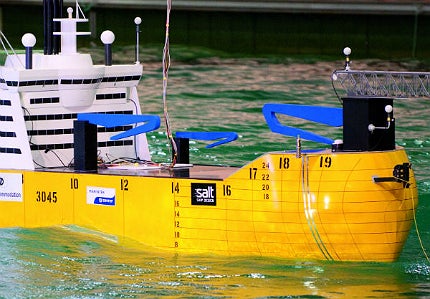 Enhanced oil recovery (EOR), optical gas and hyperspectral imaging, nanotechnology, the whole concept of the digital oilfield. The offshore industry continues to operate at the leading edge of technological innovation, as it strives to discover new resources and maximise existing reserves.

This emphasis on the highest level of science and engineering expertise extends beyond the business end of exploration and production (E&P) to encompass all facets of the hydrocarbon supply chain – including accommodation vessels (AVs) designed to house personnel working on offshore installations.

Leading the drive to develop a safer, more stable alternative to existing semi-submersible platforms – one capable of comfortably housing hundreds of workers for months at a time in the world’s most remote and inhospitable offshore environments – is fledgling Norwegian company SALT Ship Design.

Louder than words: the new issue of Offshore Technology Focus is out now

Measuring 155m in length and with the capacity to house 800 people, it offers executive-level luxury and enhanced mobility, as well as unrivalled operability thanks to azimuth propeller drives and specially-designed roll-reduction tanks fitted in the hull.

What really differentiates the next-generation vessel from its rivals, however, is a 55.5m-long, heave-compensated telescopic gangway linking the bow of the ship to the offshore drilling platform.

"All the major design decisions on the project are focused around this gangway, which is the biggest ever built and must remain as still as possible," explains director of project development Johannes Eldøy. "Integrating it into the vessel was a significant hurdle that required brand-new solutions.

"The AV was a novel thing for SALT as a company. We started from scratch with a blueprint that incorporated a lot of new innovations aimed at combining the functionality of an offshore vessel with the interior of a luxury hotel – from a design point of view, it was a major challenge."

"Measuring 155m and with the capacity to house 800 people, the ship offers executive-level luxury."

Traditional offshore installations are stabilised using bottle or column-shaped hulls that are filled with water until semi-submersed and then anchored to the sea bed with mooring lines, thus protecting the platform against excessive rolling and pitching caused by waves and high winds.

The new SALT-designed accommodation vessel displays even greater motion characteristics, thanks to water-filled tanks integrated into the bottom and sides of the innovative mono-hull, which looks virtually identical at both bow and stern. Air valves are used to set this water in motion in the opposite direction to the wave forces acting on the external hull. Known as ‘roll damping’, this method is proven to improve the comfort of those aboard. The valve openings can be adjusted depending on whether the vessel is stationary – referred to as ‘hotel mode’ – or in transit across the open ocean.

"We suggested integrating the roll-reduction tanks in order to make the ship comfortable in many different operational modes, no matter how much weight is exerted on the 2,000m² working deck," Eldøy tells me from SALT headquarters on the Norwegian island of Stord. "We developed the tanks in close collaboration with German company Hoppe Marine and their design is very project-specific."

The OAV is also equipped with six independent ‘azimuth thrusters’, rotational propeller drives used for propulsion and positioning. Employed to keep the accommodation vessel in the same position when stationary, the 3,000kW thrusters counteract the external forces exerted by waves, currents and wind.

"The vessel has three separate engine rooms and each of these is connected to one thruster or propeller in each end of the vessel," explains Eldøy. "In this way, even if a fire or system failure occurs in one of these engine rooms, the crew is still in total control and can choose to continue operations, or disconnect and cease in a safe manner.

"The vessel displays greater motion characteristics thanks to water-filled tanks integrated into the innovative mono-hull."

"According to the requirements for this type of vessel, you only need two separate systems or engine rooms, but instead of doubling these systems we have tripled them, in addition to putting a lot of effort into evacuation systems and the strategic location of lifeboats," he adds.

Improving the standard of operating redundancies – back-up technology designed to replicate key engineering systems – is currently a priority across all shipping industry sectors.

The level of comfort on board the SALT-designed OAV may not compare favourably with an average luxury cruise liner, but by offshore standards it is a class apart. The interior features 850m² of office space, conference rooms and recreation facilities, including a gym, sauna, two swimming pools, a running track and an auditorium; it is also equipped to store food for up to three months at a time.

When finished, the vessel will provide construction support and living quarters for support personnel during the commissioning, maintenance and decommissioning of offshore installations worldwide.

The OAV is being built by Hyundai Heavy Industries of South Korea – the world’s largest shipbuilder – under contract for Østensjø subsidiary Edda Accommodation, and is scheduled for delivery in Q2 2015. Twice the size of its predecessor Edda Fides, which has successfully competed offshore operations in Singapore, the Mediterranean and Australia, the vessel also features a 120t rig support crane and two supply cranes, making it highly suitable for cargo handling and construction support.

"The 55.5m-long, heave-compensated telescopic gangway links the bow of the ship to the offshore drilling platform."

With an option for a second ultra-stable AV already confirmed and a noticeable industry buzz around the latest edition to Østensjø’s burgeoning fleet, Eldøy is understandably sanguine about the future of mono-hull offshore accommodation vessels.

"Semi-submersibles typically perform operations that last between three to six months and then the next job may be on the other side of the planet, so they spend a lot of time in transit," he says.

"One of the main advantages of this concept is mobility. The vessel can be moved from, say, the Gulf of Mexico to the North Sea in less than half the time, and with a lot less fuel consumption and pollution. It is also cheaper – investment and operating costs are lower than on a semi-submersible."

Crucially, the OAV is also designed to function efficiently in the Arctic, home to an estimated 30% of the planet’s undiscovered natural gas reserves and 13% of its undiscovered oil. With super-majors and independent oil companies (IOCs) being forced into ever more inhospitable environments, ultra-stable vessels that can safely house key personnel for long periods are set to become a fundamental element of offshore operations in the frozen north and worldwide.

Depth of knowledge: educating a new generation of subsea engineers

An acute shortage of 10,000 ultra-deep water specialists has prompted the University of Houston to establish the first ever US graduate programme in subsea engineering.

Be prepared – risk management for the offshore oil industry