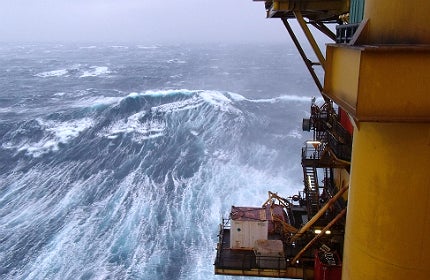 For years scientists have been looking for ways to make invisibility cloaks a reality, by shielding objects from light and other electromagnetic waves.

But what if we could make floating objects, such as an oil platform or storage tanker, invisible to physical, water waves? Professor Mohammad-Reza Alam may have found the answer.

Alam, a fluid mechanician, and his team of researchers at the University of California, Berkeley, have come up with a technique to make these structures immune to the up-and-down motion of rough seas.

"We in academia think about ideas that belong in the future, some 20 or 40 years later."

In his paper published on 23 February in Physical Review Letters, Alam notes that in an ocean, water separates, or "stratifies", into layers. The top layer is heated by solar radiation, while the bottom layer is made cooler and denser by melting ice and the flow of rivers.

The idea is to turn rocky, surface waves into "interfacial waves", which ripple between these two layers.

Using computer simulation, the scientists modelled a process of laying down concrete blocks or "cloaks" on the sea floor in front of a floating object.

These blocks should be carefully placed, so that they create rippled patterns. If the water is right, approaching waves that pass over the blocks should disappear below the surface of an oil rig, and reappear on the other side.

Here, Professor Alam explains his proposed cloaking theory in more detail and sheds light on when – and if – this idea will be transferred into a commercial application.

Sarah Blackman: How did the idea of making ‘calm ocean spots’ come to you?

Mohammad-Reza Alam: We’ve been working on the effect of ocean topography on the surface and interfacial waves. I came across the cloaking article in electromagnetic waves, and thought can be do something similar at least in terms of concept in the ocean.

SB: How are concrete blocks able to influence surface waves to pass underneath them, instead of crashing into them?

MRA: A surface wave consists of surface elevation and also motion of fluid particles underneath the surface (kinetic energy of wave, which is in fact equal to the potential energy from the motion of these fluid particles).

"We use a simplified model of two-layer stratified ocean, but the real ocean is continuously stratified."

Note that these two (surface elevation and motion of fluid particles) are dependent on each other and must exist so that we can see a wave.

Bottom obstacles have to be in sinusoidal forms (like near-shore sandbars). But perfect sinusoid is not necessary. In fact, the closer the shape to a sin curve, the better the interaction, but again just random obstacles placed at a constant wavelength would work too.

SB: How big a threat do freak waves pose to offshore oil installations and how have they been handled before?

MRA: Our proposed mechanism is not designed for single freak waves but more for regular high energy ocean waves. But, in general, freak waves are serious threat to offshore platforms as well as shipping industry. They resulted in the loss of many super-tankers over the past decades.

SB: How do previous methods in protecting offshore platforms from waves compare to your invisible cloaking method?

MRA: The only other sheltering mechanism I can think of is the break water, but it requires putting a giant wall in water. That is costly to make and also causes issues for ships, boats and sea animals and environment.

SB: Will this idea be transferred into real-world applications?

MRA: We in academia think about ideas that belong in the future, some 20 or 40 years later.

"Our proposed mechanism is not designed for single freak waves but more for regular high energy ocean waves."

It can come to application in a number of ways. First, creating shelters (note that the idea is efficient in relatively shallow water, not the deep ocean). Second, looking for locations in the ocean with high stratification and sandbars or periodic or near period features.

SB: You said the idea is efficient in shallow water. Could this cause a problem in developing commercial applications as oil companies increasingly look to explore in deeper waters?

MRA: There are alternative approaches we are currently working on for deep water (we call it the "wave bridge"), but it is still under investigation. Hopefully, within a couple of months, we should have something solid in hand.

SB: What are your next steps in this ground-breaking research project?

MRA: We use a simplified model of two-layer stratified ocean, but the real ocean is continuously stratified. The next theoretical step is to see how much the results change if we use a more realistic continuous stratified model. Then we have to do experimental validation (i.e. lab tests) and then ocean test. There is a long way to go.

From disused oil rigs to living reefs: in pictures

Disused oil rigs have become home to millions of ocean creatures in the Gulf of Mexico, but hundreds of habitats could soon be wiped out under US rules.

Many oil companies still rely on unsophisticated visual reports of oil spills, meaning many leaks are not detected until a slick comes to the surface and is visible to the human eye.