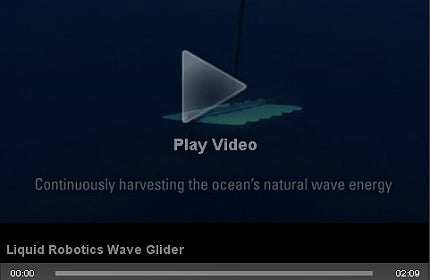 Offshore oil and gas drilling is a costly, labour and energy intensive business that demands constant day-to-day monitoring, both above and below the sea. Therefore, any device that can seamlessly monitor and collect sub-sea data autonomously in very rough conditions for up to year at a time, without a battery, and requiring very little maintenance or monitoring, will no doubt be popular with the industry. And that is exactly what autonomous robotics company Liquid Robotics is counting on.

The company’s key product, the Wave Glider, is the world’s first wave powered autonomous ocean robot that relentlessly gathers and transmits data relying only on solar and wave power to work.

In the past, it has typically been used for research projects. Two were deployed in the Beaufort Sea in the Arctic to collect critical temperature data in the upper six metres, with one also taking surface images from an aft-mounted camera for situational awareness. Both Wave Gliders exceeded the goal of 900 nautical miles (at 1,325 and 1,418 nautical miles) and recorded and transmitted nearly 900,000 temperature measurements.

Most recently, the PacX Wave Glider set a new world record for the longest distance travelled by an autonomous vehicle after journeying 9,000 nautical miles across the Pacific Ocean.

From ocean research to the offshore oil and gas industry

"Most recently, the PacX Wave Glider set a new world record for the longest distance travelled by an autonomous vehicle."

Spotting an untapped market, Liquid Robotics decided to promote and adapt the Wave Glider’s skills to the offshore oil and gas industry.

Referring to this recent cash injection, Bill Vass, CEO of Liquid Robotics, said in a press statement: "We are now well positioned to scale and accelerate our sales and service offerings to deliver even greater competitive advantage for our customers, partners and shareholders."

Equipped with satellite connection, GPS, ocean sensors, intelligent computers for navigation and a unique two-part architecture that uses the movement of the sea to propel itself forward, the Wave Glider has a number of uses for the offshore oil and gas industry.

"Liquid Robotics decided to promote and adapt the Wave Glider’s skills to the offshore oil and gas industry."

For pre-exploration data retrieval it can autonomously record weather, wind, wave height, current, conductivity, temperature, depth, ice and acoustics. Its data is both continuous and delivered in real time.

During operations it can be used to replace or assist various seismic and drilling activities, such as survey support and collecting enhanced images. It also has a range of uses for operational monitoring, such as seep detection and tracking.

The Wave Glider’s computers run solely on solar energy soaked up from two panels on its back, and because it can operate unmanned and doesn’t require a boat to be deployed while it is at work, as is traditionally the case with some autonomous vehicles used in the oil and gas industry, it is cost effective and hassle free.

Preparing to take the industry by storm

The company this week also launched an updated and improved version of the Wave Glider, called the Wave Glider SV3. It’s 40% longer, can carry 100 pounds of equipment, instead of 40 pounds, and is long enough to include another row of its improved solar panels. It can also do 2.5 knots, which is an improvement on the 1.5 knots its predecessor reached.

Liquid Robotics’ venture into the oil and gas industry is at an early stage, but as the company has already proved in the last week, with its new technology and world record – it’s out to impress. It’s possible its seamless method of data capture, without the limitation of additional labour and interruption due to battery changes, could turn the Wave Glider into a routine device used at most offshore oil and gas operations in the future.