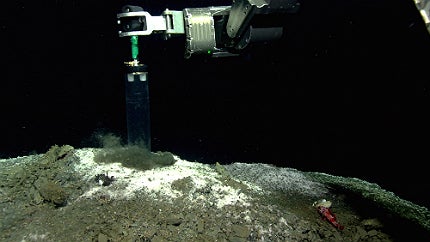 To read an interview with JOGMEC’s research leader Koji Yamamoto click here or on the image above.

What shale gas did for the US, methane hydrates could do for Japan, and indeed the world. That’s according to industry analysts who predict that the unconventional fuel could radically change the global energy outlook, following successful extraction by the Japan Oil, Gas and Metals National Corporation (JOGMEC) in the Eastern Nankai Trough two months ago.

The discovery opened what the US Geological Survey refers to as an "immense carbon reservoir" that could meet Japan’s energy needs for more than a century and provide an alternative resource to nuclear power, which the country has been seeking to replace since the Fukushima Daiichi meltdown in 2011.

If similar discoveries follow, methane hydrates, which are estimated to hold up to 15 times the amount of gas held in shale deposits around the world, could prove revolutionary to the energy industry.

But it’s still early days, and huge costs of commercialisation and potential ecological and environmental risks are being flagged.

"What shale gas did for the US, methane hydrates could do for Japan, and indeed the world."

Writing in the Atlantic, energy analyst and consultant Chris Nelder said Japan’s experiment to produce gas from methane hydrates is an "enormously expensive" pilot project and nothing more.

Referring to an article by American journalist and author Charles C Mann in April, Nelder added: "If Mann’s data on methane hydrates is correct, then Japan’s experiment so far has taken ten years and $700m to produce four million cubic feet of gas, which is worth about $16,000 at today’s US gas prices, or about $50,000 at today’s prices for imported LNG in Japan."

The question whether methane hydrates produced in Japan can be scaled up at a price competitive with shale gas, which is currently just in excess of $4 mmbtu in the US, is therefore key to answering its potential as a revolutionary new energy resource.

Christopher Knittel, a professor of energy economics at the Massachusetts Institute of Technology, told EnergyCollective.com in March that the development of hydrates could potentially erase the price differential between the US and Japan.

"Depending on where the final cost of capturing methane hydrates ultimately rests, this can mean large reductions in natural gas prices throughout the world," Knittel said.

"It’s still early days, and huge costs of commercialisation and potential ecological and environmental risks are being flagged."

But Nelder argues that we have no way of knowing when it might be possible to recover commercial volumes of the gas, or at what price.

"We have no reason to believe that if commercial quantities are recoverable by 2018 as Japan hopes – which seems incredibly optimistic – that the price of that gas will be competitive with imported LNG," he said.

Lucia van Geuns, senior research fellow for the Clingendael International Energy Programme at the Clingendael Institute in the Netherlands, said more and longer field tests also need to be done to test the feasibility of commercialising a production technique that can produce methane from frozen hydrates 1,000 metres below the surface and 50 miles off Japan’s shores.

"The production trial offshore Japan from a hydrate formation below the Eastern Nankai Trough only lasted one week. Bad weather and equipment problems made them stop, I understood," says van Geuns.

"Still," she added, "it was the first time the scientists extracted methane offshore with the depressurisation production technique."

Before full-scale production of methane hydrates can begin, studies must also be carried out to analyse risks such as the destabilisation of the sea floor, which could cause underwater landslides, and potential greenhouse gas leaks.

"Methane itself is a greenhouse gas which is 100 times more damaging than carbon dioxide."

Locked deep under water, methane hydrates are extremely difficult to extract. They can only exist in a low temperature of -80°C or below and under pressure 23 times that of a normal atmosphere.

Many geologists believe that the wrong drilling method could destabilise the seabed, causing vast amounts of sediment to slide miles down the continental slope, devastating marine life and even leading to deadly tsunamis.

JOGMEC’s engineers used a depressurisation method to extract methane gas from hydrates earlier this year by setting an electric submersible pump in a drilled hole and bringing the water to the surface to decrease hydro-static pressure.

Another key environmental concern for producing methane hydrates is the potential for greenhouse gas leaks. A report by the Climate Energy Institute in 2012 notes that methane itself is a greenhouse gas which is 100 times more damaging than carbon dioxide, and scientific studies are showing that the gas has already started to "bubble and hiss" out of oceans and soils in the Arctic, leaking into the atmosphere and contributing to global warming.

In an emailed statement, MH21 group leader Kojo Yamamoto said: "Environmental impact assessment is very important. We have surveyed the marine ecosystem and impacts by the production test. A research programme for landslide risk has undergone, too."

Japan hopes commercial quantities of methane gas from hydrates will be produced from 2018, but the feasibility of extracting the fuel is still at a very early stage of development.

Then again, if the country is successful, it could open up another world of energy.

For the first time in history, Japan has produced methane gas from offshore hydrate deposits located hundreds of metres below the sea.