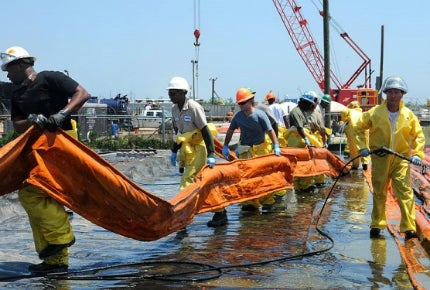 The severity of offshore blowouts should not be taken lightly. While exploration and production is responsible for far fewer oil spills than tankers and pipelines, the risk of severe environmental damage – and inevitable loss of life – caused by leaks from seabed wells is far greater.

According to recent report by the EU Commission’s Science for Environment Policy, a whopping six percent of all oil spilled in 1,213 incidents between 1974 and 2010 came from a single blowout – the Deepwater Horizon disaster in the Gulf of Mexico.

In a roundtable interview, industry experts tell Offshore-technology’s Sarah Blackman how this risk should be managed in the wake of a major lease sale stretching across 38 million acres off the coast of Louisiana and Alabama earlier this year.

Lynn Scarlett, co-director, Center for Management of Ecological Wealth at Resources for the Future: In the immediate aftermath after the event, the Department of Interior drew upon the work of various academic institutions and other organisations, including those such as Resources for the Future, who prepared documents for the Oil Spill Commission.

Based on conversations with people at the Department, the outreach has included extensive and continued engagement with the American Petroleum Institute and with private-sector companies seeking their input and expertise; outreach to the environmental community; and outreach to a variety of experts in economics, environmental sciences, engineering and risk management.

RFF has been pleased to see that some of the kinds of recommendations included in its analysis for the Oil Spill Commission have been undertaken. Chief among these is the finalising of their Safety and Environmental Management Systems regulations.

Peter Bjerager, director of Oil and Gas Operations at DNV, North America: DNV’s position is that the most effective dynamic for increased safety is regulatory authorities setting functional requirements, and the operators proving they achieve these.

With prescriptive regulations there is a risk of creating a ceiling to safety (comply but not exceed), and losing sight of the total safety barrier picture.

Safety systems alone are not enough. How the well is constructed, and how safety barriers are used throughout the process are equally relevant.

Martyn Fear, vice president for drilling and completions at Husky Energy, Atlantic region: Both operators and contractors need to address the gap between their corporate expectations and what these incidents reveal front-line standards to be, by which I mean a lot of these incidents come as a surprise to the corporations involved and that basically tells you that they don’t know enough about what’s going on at the front line.

Another point would be to avoid inappropriate incentivisation, in other words, if you incentivise operations for pace over and above all else, then that comes at a cost in terms of risk management.

SB: How can oil spills be prevented through risk management?

Peter Waite, head of Services at Altor Risk Group: Oil spill prevention is a specific area of what use to be called "Loss Prevention" but is now "Process Safety" or "Integrity Management".

The Risk Management Process should start with identification of the hazards and how they might be realised in practice.

This allows an assessment of the risks and the adequacy of prevention, mitigation or control measures.

The Integrity Management System should define the overall approach and how the measures are set, monitored and reviewed.

It is of no use to have a rigorous risk assessment procedure identifying mitigation measures but not pay any attention to ensuring measures are in place and maintained, and continue to be adequate when circumstances change.

Dr Frances Metcalfe, associate director, Oil and Gas at Cambridge Consultants: New technologies may not be able to address major catastrophic scenarios such as Deepwater Horizon, but there are situations where it would be beneficial to know about potential leakage issues sooner rather than later.

Decisions can then be made as to how to react – whether to shutdown a pipeline, for example, or where exactly to deploy a remote operating vehicle.

SB: What can the industry and governments do to improve risk management programmes?

LS: Several options explored by RFF researchers include the potential use of Accident Sequence Precursor analysis.

In effect, such analysis looks at "event trees" or possible event sequences and, using data on failures or problems of individual parts of the sequence, analysts can help identify critical "risky" areas that warrant additional safety measures.

Other options include targeting agency "inspections" by using existing data on "poor performers," enhancing self-reporting of accidents or incidents.

Such reporting can help agencies identify "repeat" incidents or accidents, which can help point to equipment or practices require additional safety measures. Better emergency response can also be critical.

SB: What are the best technologies company can use to quickly stop a leak and clean up an oil spill?

Ole Aspholm, oil spill management expert at DNV: Controlling the source and stopping the leak is the first priority. Technologies for this include the in-place Blowout Preventer (BOP), heavy fluid / drill mud, subsea capping or in extreme cases drilling of a relief well.

While no system or technology can recover all oil from a large spill, mechanical recovery with booms and oil skimmers should be the primary response option, as it contains and removes the oil.

FM: Currently, the most typical methods of detecting an oil spill involve aircraft with long-range radar and scanners; however, they are restrictive due to cost and are difficult to operate accurately.

"The most typical methods of detecting an oil spill involve aircraft with long-range radar and scanners."

This means that many leaks are not detected until they reach the surface and form a slick which is then visible to the human eye.

Any detection system must detect spills early enough, but must also be completely immune to false alarms.

Companies such as Cambridge Consultants are innovating in this area by using their expertise in wireless communications technology to improve the data transfer from sensors, and thus enable users to put sensors in more remote environments.

SB: Is using dispersants to break up oil simply fighting pollution with pollution?

"Mechanical recovery with booms and oil skimmers should be the primary response option."

PW: I think oil spill response plans should consider what could be affected given different sizes of spill and weather conditions then define the mitigation to be used in different circumstances. There may be situations where dispersants are the least – worst option.

OA: The use of dispersants is sometimes a valid response option. This depends largely on the nature of the spill. In every case a net environmental benefit analysis should be carried out to assess the total environmental impact.

The dispersant alone is not particularly toxic, but it removes oil from the surface and increases the amount of oil in the water column.

SB: As a large chunk of future oil is set to come from deepwater, is this a sign that affordable oil is slipping away from us?

MF: I don’t think affordable oil is slipping away. One of the biggest revelations in the last decade has been unconventional oil, in other words things like oil shales, which have unleashed a wave of very cheap production in the United States, for example.

It’s true that offshore, discoveries are trending towards deeper water and so forth, but it’s as much oil field inflation as is the nature of the deposits that’s pushing costs up. There are still cheaper sources out there though.