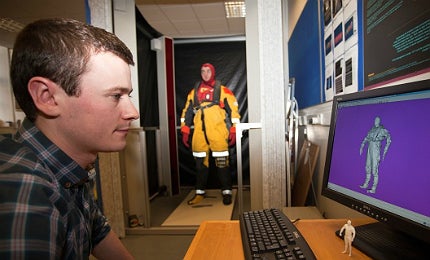 To accurately quantify the current body size of offshore workers, the Robert Gordon University in Aberdeen is conducting a two-year study using 3D scanners to measure the size of the workforce.

The study has provoked an interest in the health and fitness of the workforce, which is known to be an ageing group, as well as concern about the safety implications of a heavier, and therefore presumably larger, workforce operating in a space originally designed for smaller people.

RGU’s study is the first of its kind for nearly three decades. Its aim is to better inform ergonomic safety in the offshore work place – but what can we expect it to tell us about the modern day offshore workforce and how will the results improve the industry?

Objectives of the study

"Robert Gordon University in Aberdeen is conducting a two-year study using 3D scanners to measure the size of the workforce."

"We want to make the industry aware of the size of the actual people working there. We need to not expect the size that would have suited them [workers] three decades ago to suit them now," project leader at RGU, Dr Arthur Stewart, says.

Dr Stewart, who instigated the project along with Dr Graham Furnace, a medical advisor at Oil & Gas UK, says that in a couple of months his team will move from the RGU to Falck Nutec’s offshore training facility in Dyce, where they will use the same 3D scanning technology that is used in 3D films and animation to scan 600 offshore workers’ bodies.

The team will divide people into weight categories and map their size and variability with up to six concise scans.

"Shoulder width and chest depth are two critical dimensions we are going to be measuring, which might critically affect the ability of two people to pass each other in a narrow corridor," says Dr Stewart.

The data, which will be owned by Oil & Gas UK, will be made freely available to the industry.

Oil & Gas UK and Dr Stewart’s team believe designing rigs with current, and not old, data will lead to rigs with better ergonomic safety. But what aspects of offshore safety are most affected by a larger workforce?

"The study has provoked an interest in the health and fitness of the workforce, which is known to be an ageing group."

"What I see as the biggest impact is on helicopter transportation," says industry ergonomics advisor, Tim Southam, from PTP-Global Ltd.

Not only do larger people take up more room and make for a particularly uncomfortable ride – as many industry insiders have testified to, including Southam – but if a helicopter ditches, workers need to be able to squeeze through small spaces to quickly exit the vehicle.

Health and Safety Policy Manager at Oil & Gas UK, Bob Lauder, says that the industry has already made adjustments to life boat capacity and payloads on helicopters have been adjusted in accordance with a Big Person study that Oil & Gas UK carried out a few years ago, which showed them the body size of the industry workforce is increasing. Also, in 2005, the Civil Aviation Authority increased the weight allocation for each helicopter passenger by 20lbs, from 14 stone to 15 stone 6lb.

Southam also warns that decades’ old rig designs servicing people that are now on average bigger can affect special factors, such as crawling under pipes, the size of beds, living space and shower cubicles.

Dr Stewart agrees, he says: "If you can imagine an emergency situation, body size, when you’re trying to move quickly and urgently, can become potentially critical, particularly if you are trying to escape through a narrow window for example."

However, not all concur. John Taylor from offshore workers’ union Unite says: "The size of your body mass doesn’t make a blind bit of difference getting out of a corridor, it doesn’t make any difference in the accommodation. The only problem would be if a person became that overweight he couldn’t escape out of a window in a helicopter."

Dr Stewart and Lauder stress that the study, which is funded by Oil & Gas UK and major offshore companies, isn’t focussing on the weight or health of offshore workers, although weight will be recorded.

However, they both concede that health relates to body size; therefore it is almost impossible to talk about one without considering the other.

A pilot study report by RGU compiled in 1994 and entitled ‘Diet, Health and the Offshore Worker’ reported that offshore workers have typically been characterised as "hard-working, hard living types" and it highlights that earlier studies suggested they are not as fit as they should be.

"The offshore work force is an ageing workforce, a lot of the guys have been working offshore for 25 years and they’re now 50 – 55. As your workforce ages they’re not as fit as they used to be and they’re overweight," Taylor says.

"Everybody’s body shape has increased and that can bring health problems for the heart and diabetes."

The pilot study, which also makes this point, suggests certain lifestyle factors, such as "quantity and quality of food available," easily accessible duty free tobacco and shift work leading to irregular sleeping habits, are all factors affecting the health of workers.

It doesn’t seem much has changed in the lifestyles of the offshore work force either. Workers can still smoke on site in specially designated areas and as Southam points out, you can get "four or five large meals a day if you want".

Transocean has recognised this problem and are addressing it by offering healthy eating and fitness assistance to workers with a waist of more than 37 inches, which both Lauder and Taylor support.

However, unlike Norway, where 120kg is the largest an offshore worker is allowed to weigh, in the UK there is no automatic cut off figure that prevents people working offshore, though anyone with a BMI of more than 40 is required to satisfy a number of additional conditions before they are passed as fit to work offshore.

How will this new focus on size and weight change the industry?

"Transocean has recognised this problem and are addressing it by offering healthy eating and fitness assistance to workers."

RGU’s study on the whole is welcomed by the industry, even if it has unwittingly put an uncomfortable spotlight on the waist size of the workforce.

Dr Stewart and Southam believe a study of this kind should be conducted every five to ten years to keep data fresh and better inform ergonomic safety design of rigs and equipment.

Even so, there’s a sense of nervousness around the current magnifying glass on workers’ weights.

Speaking in relation to possible health related changes, Taylor says: "[Any changes] should be introduced over a period of time to give people time to change their habits.

"We would be concerned if we woke up one morning and anybody who was overweight was banned from working offshore."

However, Lauder assures this isn’t about "singling people out", but safety.

"This is a multifaceted issue requiring a combination of approaches. The basis of risk management in our industry is to achieve safety by design," he says.

Lauder concludes by saying: "Alongside that we will pursue the lifestyle improvement campaigns and as the ultimate form of control, our medical examination standards will prevent seriously obese people from travelling and working offshore."