After years of working in the oil and gas industry running safety drills and operations, Simon Lamont set up Iron Ocean in 2015 to create protective clothing using his Centurion 3 fabric, which is currently under development. Tough and fire retardant, the compression fit garments become thermally active when it comes into contact with water, to help reduce the number of deaths by cold shock induced drowning.

The project has come a long way since Lamont first embarked on it in 2009. “We are due to complete and go into final testing in December of 2017, and we should be ready to fully commercialise the product by the first quarter of 2018, so by March,” says Lamont.

Lamont hopes that Centurion 3 could make a real difference. “The ultimate vision for the product is to save lives,” he says. “I would like to see our garment on the backs of offshore workers and maritime workers and energy workers, keeping them safe.” 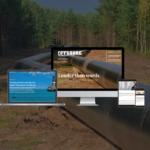 In April 2009, a Super Puma helicopter crashed just off the coast of Aberdeenshire, killing all 16 offshore workers on board. “It was a huge incident for the oil and gas industry,” says Lamont. “It shocked and saddened the entire city.” It was this incident that made Lamont, a former health and safety officer for the offshore oil and gas industry, question the current protective clothing workers rely on.

According to the World Health Organisation there are an estimated 360,000 deaths caused annually by drowning, making water-related accidents the third biggest killer globally. It is an inescapable hazard of the offshore oil and gas industry: in the US, for instance, an offshore oil worker is six times more likely to die at work than the average American.

Of the fatalities associated with oil and gas rigs, helicopter accidents play a large part. A study by the Center for Disease Control and Prevention stated that over the course of seven years within the US, transportation caused 51% of deaths in the oil and gas industry. Of those 65 deaths, 49 were due to helicopter accidents.  The industry faces the same risks in Europe, where 18,000 workers are regularly transported by helicopter in the North Sea alone, so protective and effective clothing is essential in the event of a crash.

“Over the course of seven years within the US, transportation caused 51% of deaths in the oil and gas industry.”

Oil and gas companies must follow stringent safety regulations, and invest in ensuring workers’ safety, according to Lamont. “To be fair to the oil and gas industry definitely looks at making people as safe as possible,” he says. “And they’ve looked at providing sufficient personal protective equipment. Health and safety has always been at the very pinnacle of everything that they’ve chosen to do, certainly with all the companies that I worked for.”

But the offshore environment is naturally hazardous, and efforts must continue to help ensure those who work on oil and gas platforms are as safe as possible. The idea for Centurion 3 was developed in an effort to help with this.

Lamont is in the final stages of designing the smart textile, aiming to counter a number of the factors that contribute to drowning in the event of an accident. “I started work on a brand new garment that was slash resistant to promote escape through areas of sharp wreckage, fire retardant to promote escape through areas of high heat, and to give extra time when escaping, and a garment that would self-initiate a thermal reaction.”

The fabric will take on elements of other safety equipment to create something new to the industry. “This is entirely from scratch,” explains Lamont. “There are plenty of other fabrics out there that will do individual parts of what the Centurion [does], but no one material could do it all. So that’s what we did.”

The thermal properties of the garments, designed to be worn under current thermal suits, provide a first line of defence against cold shock. The compression fit clothing retains heat when wet or cold, similar to protective clothing already worn; what is unique is Centurion 3’s ability to self-heat in addition to that. It reacts with the water, as opposed to batteries or any other electrical device, to create warmth that will last for up to an hour.

“There have been 26 commercial helicopter crashes over the last 40 years, and the majority of the deaths caused by these crashes were due to cold shock and drowning, and cold shock induced drowning,” explains Lamont. Cold shock occurs when the body temperature is rapidly decreased; it can lead to cardiac arrest, as well as inducing a panic that often causes people to gasp, breathing in large amounts of water.

“Centurion 3 reacts with the water to create warmth that will last for up to an hour.”

Centurion 3 is designed to be incredibly tough, incorporating properties of fabrics such as Kevlar that are already available. In an emergency, such as a helicopter crash, there are often additional hazards such as sharp debris which can rip and tear protective clothing. As water seeps in it adds to the cold shock, and makes a protective suit bulky and heavy. This can make it very difficult to escape through small emergency exits and to stay afloat in the water.

“What we wanted was something that was ultra-strong, ultra-light, ultra-flexible and that would form part of an armour against cold shock and the environment that you’re going to put it through. No one material could do it all, so that’s what we did,” says Lamont.

The time for finance

Development of the fabric and clothing is currently on schedule, but there are a few challenges left to overcome. The biggest hurdle will be funding, as full commercialisation of the product will require a seven-figure sum.

“I’m proud to have received funding from the Royal Society of Edinburgh,” says Lamont. “I’ve also received project specific funding from the Oil and Gas Innovation Centre, and we are currently going through stage two funding rounds with the Oil and Gas Innovation Centre as well.” This funding would allow the project to move forwards, and for Iron Ocean, which will employ twelve people, to commercialise the proof-of-concept.

Lamont says funding isn’t really a challenge, however, but a matter of timing. “There are things that we need, like funding for commercialisation, but we could never have brought that in until we were sufficiently forward enough with the technological aspects of the project,” he says. “The timeline that we’ve had we’ve managed to keep exactly to at the moment.

The project has already attracted a lot of attention, as safety remains a top priority for oil and gas companies. “We’ve been approached by oil and gas specific distribution partners, who are very interested in taking the garment and supplying it,” says Lamont.

Iron Ocean’s Centurion 3 could save live, protecting offshore workers from the cold of the ocean in an emergency – and it looks like the offshore industry might just be the beginning.