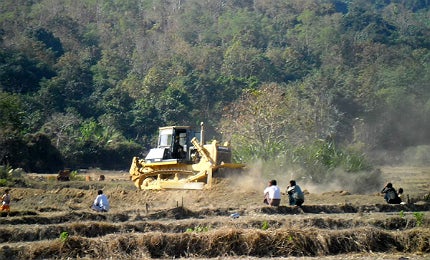 “Critics of the current government believe nothing has fundamentally changed, especially within Myanmar’s state run oil and gas industry.”

“Myanmar’s oil and gas industry is one of the oldest in the world and, besides allegations of atrocities, it apparently runs efficiently.”

Jockai Khaing, who works for the Arakan Oil Watch, an independent, community-based NGO, says: “Oil and gas extraction activities in Burma lack revenue transparency standards, as well as protection laws for human rights and the environment.

“Under the former Than Shwe military regime, the people of Burma didn’t know where the gas money was kept or how it was spent. The situation is still the same.”

However, James Finch from DFDL Mekon Group, who has legally advised in Myanmar for 15 years, believes there has been an improvement: “The offshore contracting process has just changed over to an open-bidding process. The Ministry of Energy (MOE) is trying hard to set up procedures that will satisfy the world that the process is transparent.”

In response to claims that locals are vulnerable to losing their homes and communities along oil and gas construction routes, McClenahan, who has worked on the Shwe Gas project, says: “In the [legal] documentation we put in requirements for adequate compensation to be paid to land holders.”

He says “that [it] was the responsibility of the Myanmar Government for the land holders to be adequately compensated.”

“The MOGE runs the industry on behalf of the Ministry of Energy and international companies working in Myanmar must partner with it.”

“If the situation in Burma’s onshore and offshore oil and gas industry remains the same, so will major problems…Cronies and military companies will be the only groups to benefit from this industry, while local communities in the projects areas lose their livelihoods and suffer abuses, and the country as a whole deteriorates under the resource curse.”

Khaing also says the AOW are concerned by offshore environmental factors, such as small fish species being killed and bigger fish moving territories, which is “compounded by the fact that there are not clear laws for protection or guidelines for who will take responsibility if an accident happens.”

However, domestic demand is something the government says it plans to address with further oil and gas production. McClenahan says this could be a positve: “…this should hopefully promote the development of further infrastructure and in turn manufacturing agriculture job opportunities and so forth, so I think if they use their energy resources wisely the prospects are very, very good.”

Myanmar’s Government, international companies and their governments must address these accusations and ensure energy reserves benefit the country as a whole, as well as working on improving infrastructure and the banking system. McClenahan says there is a need for “vocational schools to teach basic trades.”

Khaing goes further, saying as the government reforms, international companies need to do more: “Oil companies must demand laws and mechanisms to properly protect human rights and the environment, and ensure revenue transparency in Burma’s oil and gas sector before they make their investment.”