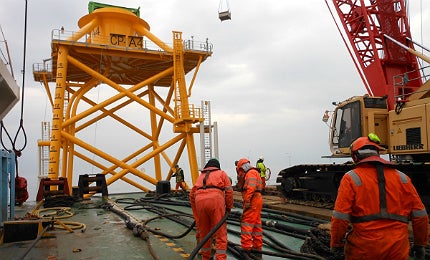 Founded as Wimpey Laboratories in 1966, FoundOcean has almost half a century’s experience in subsea and offshore foundation grouting for the global energy construction industries, while also undertaking repair and maintenance, structural inspections, pipeline and cable support and other services.

Given FoundOcean’s position as a leading subcontractor for risk minimisation in global offshore construction projects, the company’s managing director Jim Bell is well placed to provide insights into risk analysis and other aspects of subsea offshore repair work. Offshore-technology.com met Bell to discuss the challenges of safety-intensive subsea operations and to find out about the company’s recently-completed offshore repair contract for Saipem America in the Gulf of Mexico.

Rowan Watt-Pringle: How do you go about minimising the risks of subsea repair work to ensure an operation is completed safely and on schedule?

"The real challenge is getting the cement grout delivered to the bag at greater depths."

Jim Bell: Risk minimisation is about three things: firstly, there is the suitability and preparation of the equipment, for which FoundOcean has long-established procedures and processes.

The second point relates to training and supervision; it is imperative that the personnel deployed are highly confident and have lots of experience. FoundOcean undertakes regular reviews and training to ensure that the offshore team knows exactly what they are doing.

The third point is about planning. Our engineers spend a significant amount of time on every project planning for every eventuality; one thing you can be sure of is that as soon as you attempt to undertake a simple process underwater, it will become complicated.

If something doesn’t go quite to plan underwater, then it’s obviously much more difficult to recover from than at the surface. For this reason, in our training and procedures we cover every single eventuality with contingency procedures to recover from these scenarios – this combination of experienced personnel and detailed planning is absolutely key to minimising the risks involved, so that if something unexpected occurs, it can be dealt with as a matter of routine. You can have the fanciest equipment in the world but if it’s not used in the right way – or if you don’t have highly-skilled personnel – then you won’t get anywhere.

RWP: What types of technology are involved in overcoming the challenges faced during these operations?

JB: The technology that we have in terms of supporting pipelines in general is well established; pipelines have been supported by divers since the 1970s, while we first used remotely operated vehicles [ROVs] to complete pipeline support instead of divers 15 years ago for Exxon , offshore of California.

The Exxon job in 1998 wasn’t in particularly deep water; in the years since then we have been developing, improving and refining the ROV handling and installation of grout bags, which are used to support and stabilise sections of subsea pipeline.

RWP: Does working at greater depths significantly increase the difficulties faced during the installation of grout bags?

JB: The support process itself for deep water pipelines is no different; once you’ve got the bags down there, the ROV operations are pretty much identical to an ROV installation in much shallower water.

"Clients in the oil industry tend to be wary of radical new technology."

The real challenge is in actually getting the cement grout delivered to the bag at greater depths. We have managed to overcome this challenge by developing an umbilical system that allows us to pump the cement to that depth.

Another significant challenge comes in the cost of the umbilical itself: if there was a blank cheque book this could be approached quite easily using highly-expensive umbilical technology, but this is obviously rarely the case. However, by balancing performance and cost, we have arrived at a solution that allows us to effectively deploy an umbilical system without making the project uneconomical.

RWP: Do you foresee any potential technological advances that could transform deep sea repair operations in the future?

JB: I don’t think we’ll see any radical changes – we’ve developed and enhanced our capability over the last 15 or 20 years incrementally, by increasing the water depth that we’re confident working in step by step.

Our current maximum depth is about 1,500m; because we are approaching potential projects stepwise, at the moment we would be confident in offering only a couple of hundred metres beyond that point and then, once that’s proven, we may take an additional further step.

Clients in the oil industry, certainly, tend to be wary of radical new technology, so we’re always very keen to show our customers that what they’re using is already tried and tested. For this reason it’s more a story of constant refinement and incremental improvement, rather than ever being a major step change.

One of these refinements comes in the form of some recent improvements we have made to our umbilical system, for example in the mechanical linkages that we provide to support the grout hose.

RWP: Can you tell us a bit more about your recent repair job for Saipem America in the Gulf of Mexico?

"You can have the fanciest equipment in the world, but if it’s not used in the right way then you won’t get anywhere."

JB: The project itself, at 750m, wasn’t particularly deep (at just half the depth to which we have worked effectively in the past) and it has to be said that it went off without any problems at all; it was a very smooth and straightforward project that was completed as a matter of routine, so none of these contingency procedures I’ve mentioned were required.

In terms of the work itself, there were two parts to the operation. An 18-inch pipeline had been damaged by a vessel’s anchor that was dragging along the seabed during bad weather, so the first part of the process was to install a clamp, using an ROV, around the outside of the pipeline to reinstate the pipeline itself.

The grout bag was installed after this to provide additional support to the pipeline due to the extra weight imposed on it by the clamp.

RWP: Time is clearly an important factor for these types of operations, due to the loss of productivity when a pipeline is out of commission. What timeframe were you working to in the Gulf?

JB: The total time working offshore was three days. A lot of that time, however, was spent by the client – preparing the pipeline and installing the clamp and so on. In terms of the amount of time FoundOcean itself spent mixing and pumping grout, that was completed in a matter of hours; possibly half a day.

A safety programme developed by Nasa and Petrofac is helping oil and gas workers prepare for potential life-threatening situations.

Integration Of Refining and Petrochemicals: Way To Go Forward