That’s according to GlobalData’s Financial Deals database, which tracks market activity across a variety of sectors and deal types.

The deals below only include those that have been completed – so excludes rumours or those that have been agreed but not yet executed. The figures, which cover the top offshore oil and gas industry operations and technologies companies, show the market in the US to be the most active, with 46 deals taking place over the last three months. That was followed by Canada, which saw 12 deals. 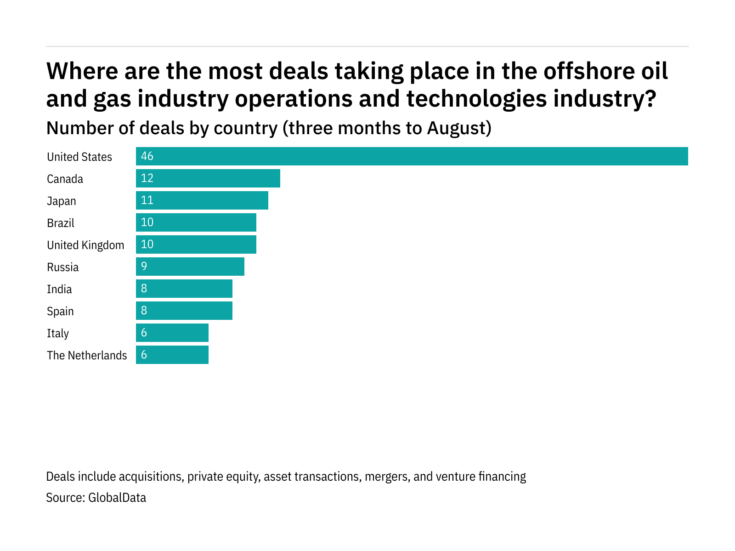 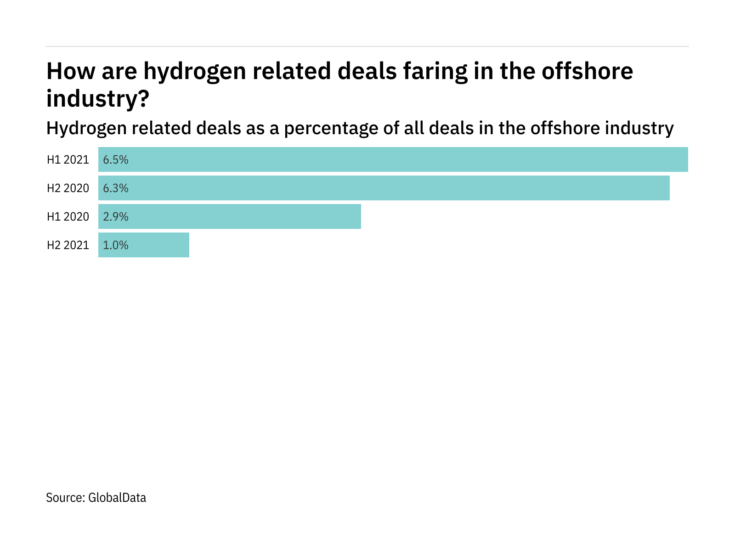 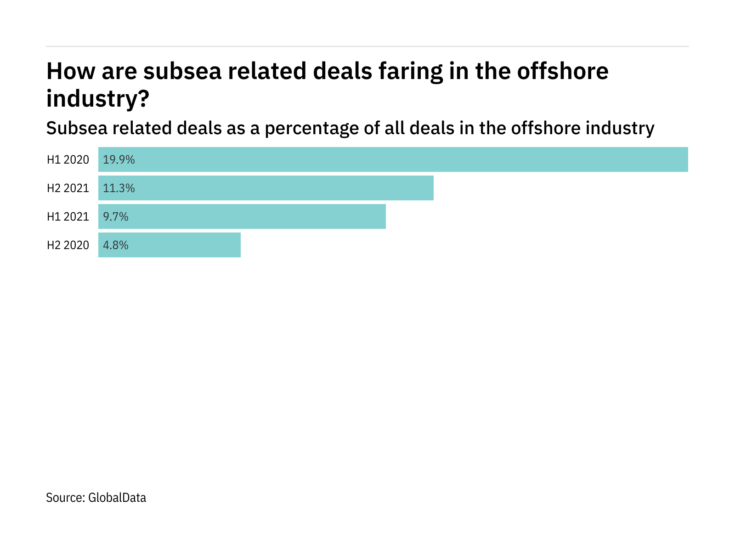 Below are some of the largest completed deals to have taken place in the last quarter.

The Public Investment Fund, a sovereign wealth fund, intends to sell a 4% stake in Saudi Arabian Oil Company (Saudi Aramco), a public petroleum and natural gas company, according to sources familiar with the matter.

The transaction is estimated to be valued at approximately $86bn, according to the people familiar with the matter said.

Chevron and Renewable Energy Group (REG) announced a definitive agreement under which Chevron will acquire the outstanding shares of REG in an all-cash transaction valued at $3.15bn, or $61.5 per share. The transaction has been approved by the boards of directors of both companies.

The acquisition consideration is 100 percent cash. Total enterprise value of $2.75bn includes a net cash position around $400m greater than debt. The transaction price represents a premium of around 57% on a 30-day average based on closing stock prices on 25 February 2022. The transaction is expected to build strength and accelerate growth across renewable fuels value chain.

The transaction is expected to close in the second half of 2022. The acquisition is subject to REG shareholder approval. It is also subject to regulatory approvals and other customary closing conditions.

76KK, a Japan-based holding company and a subsidiary of KKR & Co, a US-based private equity firm, has acquired Mitsubishi Corp-UBS Realty, an asset manager established as a joint venture from Mitsubishi Corporation and UBS Asset Management (Americas), for a cash consideration of ¥230bn ($2bn).

Going forward, the asset manager, which was previously called MC-UBSR, will operate under the name KJR Management, effective immediately.

76KK will also acquire the units in JMF and IIF currently held by Mitsubishi at market price, thereby strengthening the alignment of interest between KKR and the unitholders of JMF and IIF.

Shell Pipeline Company has made a non-binding offer to acquire all remaining public held common units (representing a 31.5% stake) in Shell Midstream Partners, a midstream company.

The transaction has an estimated equity value of approximately $1.59bn. Under the terms, the company will offer $12.89 in cash for each common unit of Shell Midstream.

Currently, Shell and its affiliates own an approximately 68.5% stake (representing 26,94,57,304 common units) in Shell Midstream. The proposed transaction simplifies the governance of the Shell Midstream's assets, reduces costs, and provides flexibility to optimise the pipeline portfolio.

Energy Transfer, a company that owns and operates diversified portfolios of energy assets, has signed a definitive agreement to sell its 51% stake in Energy Transfer Canada, a gas processing company, to a joint venture company of Pembina Pipeline Corp and KKR, for a sale consideration of approximately C$1.6 billion (US$1.3 billion), including debt and preferred equity.

Energy Transfer Canada's assets include six natural gas processing plants that have a combined operating capacity of 1,290 million cubic feet per day and a network of approximately 848 miles of natural gas gathering and transportation infrastructure in the Western Canadian Sedimentary Basin.

The transaction is expected to be closed by the third quarter of 2022. It implies a value of $1,975.98 per mcf of daily installed gas processing capacity.

On 12 April 2022, Compagnie Maritime Belge (CMB), the largest shareholder of Euronav, publicly opposed the proposed merger between Euronav and Frontline.

Lars H. Barstad, CEO of Frontline, said: “Frontline believes this transaction would form a powerful combination at an exciting point in the cycle. The combination would create a strong platform to further enhance shareholder value for our investors.”

Hugo De Stoop, CEO of Euronav, said: “This transaction would mark an exciting development for the tanker industry, creating a leading tanker company that would be positioned to serve the needs of customers, support partners, and drive technology and sustainability initiatives to lead the energy transition.”

Offgrid Energy Labs, a battery manufacturing company known for its rechargeable zinc-based battery (ZincGel), has raised funds in venture financing. The financing was led by Shell, Ankur Capital, and APVC.

The funds raised will enable Offgrid Energy to take ZincGel to the market.

GreenFire Energy, a geothermal energy company, has raised funds through a Series A financing round. The financing was led by Baker Hughes. Helmerich & Payne also investedn the funding round.

The funds will be used to support and accelerate GreenFire Energy's large pipeline of commercial opportunities across the globe and to further advance geothermal technology.

Repsol joins Suncor Energy as a shareholder to accelerate the adoption and deployment of Enerkem's technology and to develop new projects in the Iberian Peninsula (Spain and Portugal).

Enerkem has several projects in different stages of development that will help Repsol accelerate its circular economy initiatives and open new paths for production of low-carbon fuels, synthetic fuels, and renewable chemical products.

YPergas is a joint venture company located in central Guarico that produces around 50 million cubic feet of gas per day, according to four people with direct knowledge of the negotiations.

According to the sources, the transaction will mark TotalEnergies' exit from natural gas operations in Venezuela.

The transaction is part of Eni's strategy to enhance its assets and free up new resources for the energy transition. Eni will retain control of Enipower in terms of operations as well as over the financial consolidation of the company.

The agreement is subject to conditions precedent, including those pertaining to the relevant government authorities.

ExxonMobil intends to sell Bakken shale oil and gas assets located in North Dakota, US, to interested parties, according to people with knowledge of the matter. The transaction is expected to have a value of approximately $5bn.

ExxonMobil is reportedly in the final round of interviewing bankers to help launch a sale process.

Petroleo Brasileiro SA (Petrobras), an integrated oil and gas company, has signed an agreement to sell its 90% stake in the Albacora Leste concession located in the deep waters of the Campos Basin, Brazil, to Petro Rio Jaguar Petroleo Ltda (PetroRio), a subsidiary of PetroRio, for a sale consideration of up to $2.2bn.

Under the terms of the total consideration, $292.7m will be paid on the signing of the agreement, $1.6bn will be paid at the closing of the transaction, and up to $250m may be paid in contingent payments, depending on future Brent quotations.

The Albacora Leste concession covers an area of approximately 511.56 sq km and is located in the northern area of the Campos Basin, in water depths ranging from 1,000m to 2,150m, at a distance of about 120km from Cabo de Sao Tome. The average daily production of the concession from January to March 2022 was 25.4mbblsd of oil and 615.3mcmd of gas.

The transaction is in line with Petrobras' portfolio optimisation strategy and the improvement of its capital allocation, increasingly concentrating its resources in deep and ultra-deep waters, where it has demonstrated great competitive edge over the years.

CNOOC Petroleum Brasil (CPBL), a subsidiary of CNOOC Ltd, has signed a contract to acquire an additional 5% stake in Buzios oilfield located in the Santos Basin pre-salt area, Brazil, from Petroleo Brasileiro (Petrobras), an integrated oil and gas company, for a cash consideration of $2.12bn.

The purchase consideration includes $2.12bn to be received in cash at the closing of the operation, subject to the compensation and reimbursement of the signature bonus of CPBL's additional participation.

The Buzios is field is located within the Cessao Onerosa (transfer of rights) region of the pre-salt Santos Basin, at water depths ranging from 1,600m to 2,100m. The field covers an area of approximately 416 sq km.

Sidley Austin LLP is acting as legal advisor to CPBL in the transaction.

Following the completion of transaction, Petrobras will hold an 85% stake, while CPBL will hold 10% and CNODC Brasil Petroleo e Gas will hold a 5% stake in the production sharing contract of the transfer of rights surplus of the Buzios field.

The effectiveness of this transaction is subject to the approvals of the Administrative Council for Economic Defense, the National Agency of Petroleum, Natural Gas and Biofuels and the Ministry of Mines and Energy.

Shell Brasil Petroleo Ltda, a subsidiary of Shell plc, has acquired a 25% interest in the Atapu field located in Santos Basin, Brazil from Petroleo Brasileiro SA (Petrobras), for a purchase consideration of $1.1bn.

Atapu is a pre-salt oil field that is located in waters depth of approximately 2,000m. Production started in 2020 through the P-70 floating, production, storage and offloading unit, which has the capacity to produce 150,000boe per day.

Zoe Yujnovich, upstream director of Shell, said: “This transaction is the latest proof point of our commitment to further strengthening our advantaged deep-water positions in Brazil. With a leading global deep-water portfolio, this stake in the Atapu field directly supports our Powering Progress strategy to deliver the stable, secure energy resources the world needs today, while investing in the energy of the future.”

OMV Aktiengesellschaft (OMV), an integrated oil and gas company, has terminated the acquisition of a 24.98% stake in blocks IV and V of the Urengoy field, located in the Achimov formation in the West Siberian Basin, Russia, from Gazprom for a purchase consideration of €905m ($1.01bn). The transaction was terminated as the executive board of OMV has decided to not further pursue negotiations.

The acquisition would have added approximately 600boe to OMV's reserves representing OMV's share of production until the end of contracts in 2039. Production from the field is expected to start up in 2019 and to reach to more than 80,000 net boed in 2025.

The transaction would have enabled OMV to expand its oil and gas assets base in Russia.