GlobalData’s latest report, Quarterly Midstream M&A Deals Review – Q4 2019, shows that a combined value of $23.8 billion in mergers and acquisitions (M&A) was announced in the midstream sector in Q4 2019.

This showed a 21% decrease from $30.3 billion in M&A deals announced in the previous quarter. A year-on-year comparison shows a 9% increase in the number of deals and a significant 42% decrease in values in Q4 2019 compared with 106 deals with a combined value of $40.7 billion in Q4 2018. During the quarter, there were 24 midstream M&A deals with values higher than $100 million, accounting for $22 billion. 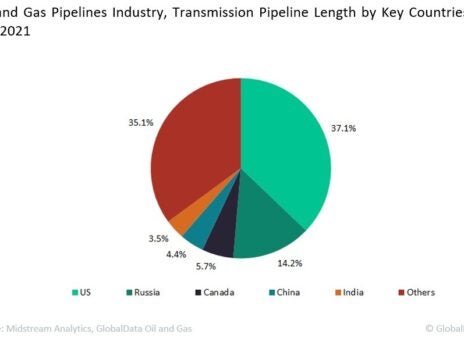 Regionally, North America remained the frontrunner in terms of deal value and the number of deals in Q4 2019, with 78% and 28% shares, registering a combined M&A value of $16.2 billion from 33 deals.

Africa and Oceania registered 15 and 19 deals respectively in Q4 2019 and South America accounted for 3% of global deals or three deals, while the Middle East recorded only one M&A deal in Q4 2019.