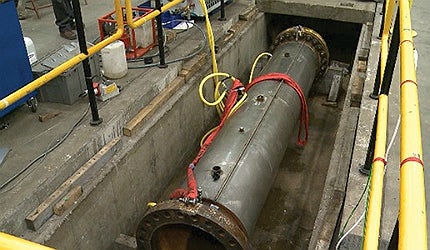 Although pipelines are the fastest and most efficient way to transport oil and Gas, a number of onshore pipeline leaks in the last few years have raised reasonable environmental concerns about their vulnerability in the long-term.

In increasingly deep offshore operations, meanwhile, the stakes are even higher as the operating environment is more challenging and a subsea leak is far more difficult to contain.

With these risks in mind, new breakthroughs in technology and material science are helping to bolster the safety, reliability and efficiency of offshore pipelines. Here we round up five of the industry’s most promising recent pipeline innovations, from anti-corrosive coatings to adhesive repair systems, that are boosting safety credentials while reducing the installation and maintenance costs of operating in the harsh marine environment.

“Methane hydrates are also a risk for subsea pipelines, as crystals can form on the inside of pipes.”

One of the many technical challenges of establishing and maintaining production in increasingly deep waters is the build-up of methane hydrates – ice-like crystals that form when methane comes into contact with cold ocean water. The dangers of methane hydrates were highlighted during the Deepwater Horizon spill, when these crystals blocked the opening of the containment dome that engineers had placed over the leak. Methane hydrates are also a risk for subsea pipelines, as crystals can form on the inside of pipes, disrupting the flow or even causing blockages.

New research carried out by a team at Massachusetts Institute of Technology (MIT) is now offering an alternative to the current expensive and energy-intensive hydrate mitigation techniques. The team developed a hydrate-phobic liquid coating with similar surface energy properties to those of the hydrate, and observed that application of the coating reduced hydrate adhesion by a factor of four when compared to bare steel.

Although the research is still some way from becoming available to offshore operators, the MIT team’s research paper, published in Physical Chemistry Chemical Physics, notes that the studies “provide a framework for the development of hydrate-phobic surfaces, and could lead to passive enhancement of flow assurance and prevention of blockages in deep-sea oil and gas operations.”

The BW Pioneer FPSO, operated by BW Offshore, is installed at a depth of approximately 2,500m.

Launched at the Offshore Technology Conference (OTC) in Houston in 2012, Magma Global’s m-pipe carbon and polymer subsea riser is promising a new solution to the problems operators are experiencing with steel and unbonded flexible pipes.

The flexible riser material, which combines lightweight (one tenth the weight in water of steel risers) with strong fatigue and corrosion resistance and high strain tolerance, is being marketed as a way to unlock new riser configurations to simplify deepwater, high-pressure and high-temperature subsea production operations.

Delegates at OTC were impressed by the material’s possibilities, with 2H Offshore’s principal director Steve Hatton commenting: “Its weight and high resistance to fatigue and corrosion solve many of the problems that riser designers are currently struggling to accommodate with current steel and flexible solutions. I believe the new technology developed by Magma will reduce risk and installed cost of riser systems – the time has finally come for the use of this type of material in the offshore industry.”

The offshore industry’s movement into deeper waters has major cost implications due to the complexity of transporting oil and gas back to the shore, ushering in a greater use of expensive LNG plants and FPSO vessels. The main challenge with deepwater pipelines is the thickness of the pipes, which is necessary to withstand deepwater pressures but creates a weight that makes installation and welding difficult.

Marine classification society and risk manager DNV’s solution to this problem is X-Stream, a new pipeline concept that controls the pressure differential on the inside and outside of the pipe, allowing a significant reduction in weight when compared to the current standard.

“In this way, the internal pipeline pressure is maintained above a critical level for any length of time.” The company believes that, for a gas pipeline in 2,500m of water, pipe wall thickness can be reduced by 25-30%.

Blind Faith is located in approximately 7,000ft of water at Mississippi Canyon blocks 695 and 696 in the Gulf of Mexico.

Developed by Dow, the Neptune subsea flow assurance insulation coating is the end-product of a multimillion dollar R&D project carried out over several years. While Dow notes that competitive coatings often require up to seven layers to protect pipelines with adequate thermal and corrosive protection, Neptune needs only two – an anti-corrosion, fusion-bonded epoxy coating and an insulation coating based on hybrid polyether thermoset material.

With these two layers, Dow claims that Neptune can provide temperature performance from -40°C to 160°C during installation and use, at depths of up to 4,000m.

“Market knowledge, chemistry expertise and innovation capabilities of Dow – combined with the application expertise of the coaters with whom we have collaborated – have enabled us to deliver a flow assurance wet insulation solution with the widest temperature range available on the market today,” said Dow Oil & Gas general manager Larry Ryan. Neptune was made available in May 2012 for subsea architecture applications, with line pipe and field joint applications set to follow.

“PipeAssure is an adhesive composite material that can be wrapped around corroded or degraded pipelines.”

A number of products coming on to the market are emphasising the benefits of composite materials for subsea operations. One such is PipeAssure, developed by Malaysian national oil and gas company Petronas in partnership with the Commonwealth Scientific and Industrial Research Organisation (CSIRO) in Australia.

PipeAssure has been developed to address the difficulty of repairing and maintaining underwater pipelines, which deteriorate under harsh subsea conditions and often have to be patched up with welding operations, which can often necessitate temporary but costly production shutdowns.

PipeAssure is an adhesive composite material that can be wrapped around corroded or degraded pipelines to restore them to original design specifications. The composite achieves this through its material make-up, which begins as an epoxy-based resin system impregnated into a glass fabric before curing into a fibre-reinforced composite.

The material can adhere to submersed steel substrates and, with a high thermal softening point, endure the range of temperatures experienced in this operating environment.