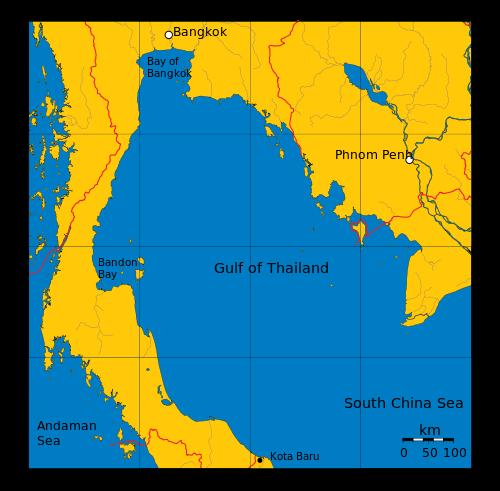 A major oil spill incident that leaked about 50,000 litres of crude oil into the Gulf of Thailand, from a pipeline operated by PTT Global Chemical on 27 July, has severely impacted the region’s tourism and fishing industry.

PTT Global Chemical, which is part of state-controlled PTT company, has apologised about the leak and said the pipeline has been plugged.

The ongoing cleanup operation is expected to take another two to three days.

Government spokesman, Pakdihan Himathongkam, was quoted by the Guardian as saying that aircraft were releasing chemical dispersants over the half-a-mile-long oil slick.

The oil spill, claimed to be the fourth major one in the history of Thailand, has blackened water at the beach of Prao Bay on Samet Island in Rayong province in eastern Thailand, a tourist hot spot.

Efforts to clear oil in water are underway at full swing as soldiers and volunteers are jointly working to clear black oily sludge off the white sand.

A large number of tourists, mostly Russians and Chinese, visit the island of Koh Samet and the beach at Ao Prao or Coconut Bay; however, since the spill Ao Prao beach has been closed to the public as a precautionary measure.

"The ongoing cleanup operation is expected to take another two to three days."

Thailand tourism minister, Somsak Phurisisak, was quoted by the Guardian as saying: "We’re working to move visitors to other locations if they want to move."

Greenpeace Southeast Asia programme manager, Ply Pirom, was quoted by Reuters as saying: "What has happened is far more serious than what PTT said on the first day. We can expect an impact on fisheries and from chemical contamination in the food chain."

In 2009, PTT Exploration and Production was involved in Australia’s worst offshore drilling accident, when thousands of gallons of crude oil spilled into the sea after a damaged oil well blew up.

Image: Map of the Gulf of Thailand. Photo courtesy of Feydey.

Middle East Turmoil and its Impact on the Global Petrochemicals Industry