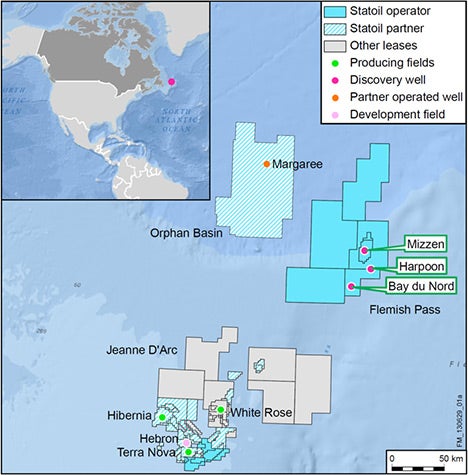 Statoil Canada and its partner Husky Energy have made a significant oil discovery offshore of Canada.

According to Statoil, the company’s first Bay du Nord exploration well has discovered between 300 and 600 million barrels of oil recoverable.

Located about 500km north-east of St John’s, Newfoundland and Labrador, Canada, the Bay du Nord discovery was announced in August.

The discovery is Statoil’s third in the Flemish Pass Basin.

The Bay du Nord well encountered light oil of 34 API and Jurassic reservoirs with high porosity, as well as permeability.

"This brings us one step closer to becoming a producing operator in the area," Dodson added.

According to the company, only a few wells have been drilled in a large licenced area, totalling about 8,500km², and more work is required, including new seismic as well as additional exploration and appraisal drilling to confirm the estimates.

"The discovery is Statoil’s third in the Flemish Pass Basin."

Statoil claims that the Flemish Pass has the potential to become a core producing area for the company, post-2020.

The company operates Mizzen, Harpoon and Bay du Nord with a 65% interest, while Husky Energy owns the remaining stake.

The Mizzen discovery is estimated to hold a total of 100 to 200 million barrels of oil recoverable and the Harpoon discovery, which was announced in June, is still under evaluation.