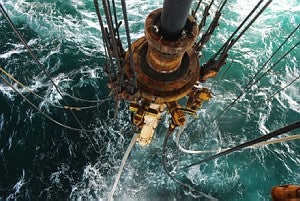 Owners of the Johan Sverdrup field in the North Sea have signed a pre-unit agreement, operator Statoil has announced.

Under the terms of the deal, the owners of production licences 265 and 501 will cooperate in the planning of the field towards an investment decision and submit their proposals to the ministry of petroleum and Energy in Norway.

Statoil said that an agreement for the development and operational phase will be signed between the licensees to establish the best field solution for Johan Sverdrup.

The field is located in a water depth of 110m and has estimated resources of between 1.7 billion and 3.3 billion barrels of oil equivalent.

It is targeted to come on stream in 2017 as a phased development, with an expected production lifetime of 50 years.

Lundin is operator of PL501 with a 40% stake, with partners Statoil and Maersk Oil holding 40% and 20% respectively.

Image: The Transocean Leader drilling rig is being used in the Johan Sverdrup field. Photo: courtesy of Harald Pettersen, Statoil.