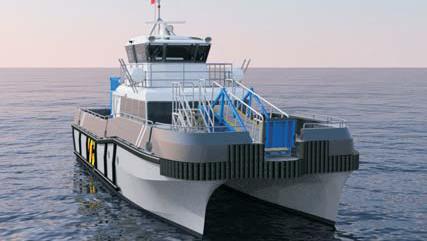 The two BV classed boats are being built for ARCO Marine and Oilfield Services and will be used in Nigeria’s offshore oil and gas industry.

"The two BV classed boats are being built for ARCO Marine and Oilfield Services and will be used in Nigeria."

In addition, the four-engine configuration will allow the vessels to complete its function safely. The vessels, which will have an endurance of four days and about 600 nautical miles and a maximum speed of 30 knots, can accommodate up to four members and four tonnes of deck cargo.

The vessels will feature a wheelhouse above the desk to provide an all-round view to ensure the utmost safety in the oil field and a fire monitor on the upper deck superstructure.

BMT Nigel Gee technical director Ed Dudson said: "We’ve worked with Penguin Shipyard International previously on a project to design and build three high-speed passenger catamarans for The Shipping Corporation of India but this is the first for the oil and gas sector, an area where Penguin is particularly strong."

The boats are expected to be delivered in the fourth quarter of 2013.

The Shipping Corporation of India Ltd