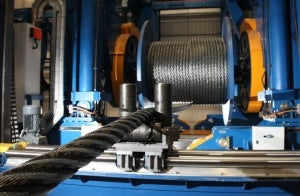 UK Business Minister Michael Fallon has inaugurated what is believed to be the world’s largest and most complex offshore ropes manufacturing facility, constructed by Bridon International.

The manufacturing facility, Bridon Neptune Quay (BNQ), was built in Neptune Energy Park on the banks of the River Tyne.

During the inauguration, Michael Fallon said: "As a growing manufacturing company, Bridon are exactly the sort of firm the Regional Growth Fund was set up to support. I’m very pleased that we have been able to provide them with £2.2m to help open this state of the art new facility."

The Minister marked the opening of the Bridon Neptune Quay by switching on the factory’s rope-closing machine, a specification constructed by German engineering company SKET, the company said.

The opening event was also marked with a range of technical seminars demonstrating Bridon’s service offerings, which include ropes development, installation and application.

Commenting on the new facility Keith said: "We are particularly excited about the complexity of the ropes that will be manufactured at Bridon Neptune Quay, as well as their enhanced bend fatigue life and reduced rotation and elongation."

Image: The manufacturing facility is expected to develop the world’s largest ropes for offshore use. Image courtesy of Bridon International.