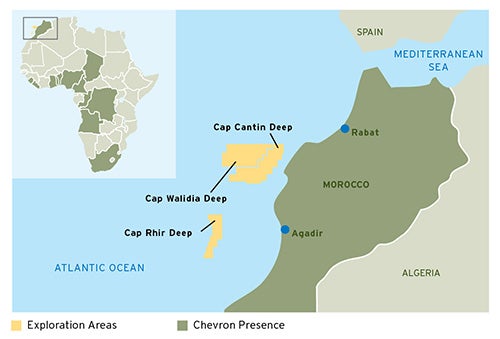 Covering a total area of about 11,300 square miles (29,200m²), the blocks are situated at average water depths ranging between 330ft to 14,700ft (100 to 4,500 metres). Once the deal is complete, the company will acquire seismic data and conduct studies in the deepwater blocks.

Chevron Africa and Latin America Exploration and Production Company president Ali Moshiri said: "This is an opportunity for Chevron to expand its already strong presence in the region and allows us to acquire further knowledge about promising geology in an emerging area."

"Once the deal is complete, the company will acquire seismic data and conduct studies in the deepwater blocks."

Post transaction, Chevron Morocco Exploration, which is a wholly owned subsidery of US-based energy company Chevron, will hold a 75% working interest in the three blocks, while the Office National des Hydrocarbures et des Mines will own the remaining 25% interest.