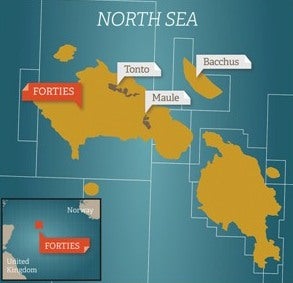 US-based oil and gas exploration company Apache has announced that its Tonto oil field, in the UK sector of the North Sea, has started its first oil production.

Apache said that Tonto-1, the first producing well, commenced production at an initial rate of 10,346 barrels of oil each day.

The company drilled Tonto-1 as a deviated well from the Forties Bravo production platform.

During drilling, the appraisal wellbore encountered 62ft of net oil pay in an Eocene-aged sandstone reservoir, at a depth of 6,325ft, which was followed by a horizontal completion lateral that logged 243ft (measured depth) of net oil pay.

"The company drilled Tonto-1 as a deviated well from the Forties Bravo production platform."

House also said the company has worked closely with the UK Government to begin production ahead of a new 3-D seismic survey that will be carried out over Forties in July 2013.

The production from Tonto oil reserves prior to the survey will enable geoscientists to figure out production patterns within the Eocene reservoir to optimise the placement of future Tonto producers.

Apache is planning to drill an additional development well by the end of 2013, after completing the 4-D (time lapse) seismic data.

Apache, which holds 100% working interest in the Tonto Field, has brought online two other wells, Maule and Bacchus, in the Forties area within the last three years.

Image: Location of the Tonto field, which overlies the Forties field in the central North Sea. Photo courtesy of Apache.