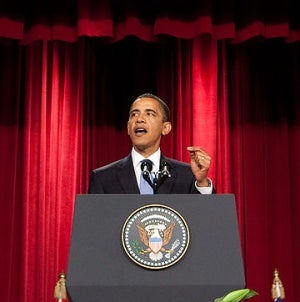 US November crude, on the other hand, was hit by concerns about slowing global economic growth, leading to a decline in the price.

In an aggressive response to Iran’s actions that led to tensions in the region, US President Barack Obama said that US will do whatever is required to prevent Iran from acquiring a nuclear weapon.

Earlier Iranian President Mahmoud Ahmadinejad said Israel had no roots in the Middle East and would be "eliminated".

The US Energy Information Administration’s inventory report will be released on Wednesday, reported the news agency.

According to the American Petroleum Institute data released on Tuesday, US crude oil stocks and gasoline stocks surged 335,000 barrels and 112,000 barrels last week, while distillate inventories declined by 483,000 barrels.

Caption: Barack Obama said America will do everything it can to stop Iran having a nuclear weapon. Photo courtesy of: The Official White House Photostream.