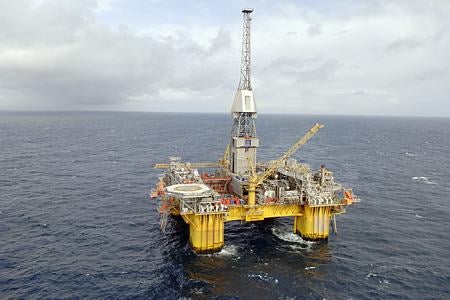 Norwegian oil and gas major Statoil and its partners have started production at the Visund South oil and gas field in the North Sea.

The field, located ten kilometres from the Gullfaks C and Visund A-platforms, is the first of Statoil’s fast-track projects.

Visund South comprises of a template with four slots, from which three wells will be drilled and tied to Gullfaks C for processing.

It also includes the Pan and Pandora discoveries, which are being developed by means of a subsea installation.

The development represents a total investment of about $985.5m (NOK5.6bn), the company said.

Visund South volumes have been estimated at around 67 million barrels of oil equivalent and the discovery is being characterised as a medium-sized one, where oil and gas account for 25% and 75% of total reserves respectively.

"The field, located ten kilometres from the Gullfaks C and Visund A-platforms, is the first of Statoil’s fast-track projects."

Visund South field development head Hogne Pedersen described it as a milestone and commended Statoil, authorities and suppliers for their cooperation in the licence.

"We’ve managed to carry out this project in accordance with our planning and investment estimates," Pedersen added.

In addition to these, the contribution from the topside contractor Aibel and the cooperation from the Gullfaks operational organisation have helped Statoil to prepare the facility and hand it over ready for production, the company said.

"During the first two years this will account for more than 40% of the total exports from Visund," Karsten added.

"This is important for the continuing life of Gullfaks, which has spare processing capacity."

Statiol owns 53.2% interest in the field as the operator, whereas the other partners including Petoro hold 30%, ConocoPhillips has 9.1% and Total owns the remaining 7.7% stake.