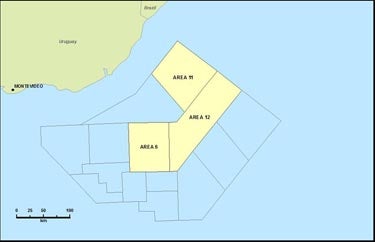 The four companies, BP, BG Group, Total and Tullow Oil, will invest a total of $1.65bn during the next three years for exploration activities in the block, located in water depths ranging from 500m to 2,500m.

Uruguay Industry, Energy and Mining Minister, Roberto Kreimerman, was quoted in a statement as saying: "We have the chance for a country that is not an oil producer to have new wealth through this exploratory work, which will be done over the next three years, as well as the exploitation that follows."

BP’s exploration contracts includes blocks 11 and 12 in the Pelotas basin and block 6 in the Punta del Este basin, which cover an area of almost 26,000 square kilometres, located about 50-100 km off the Uruguayan coast, south-east of Montevideo.

BP Exploration executive vice president Mike Daly said the contracts will give the company entry into an under-explored deepwater basin on the Atlantic margin.

"We look forward to working with ANCAP and the Uruguayan authorities to explore this large area and understand the potential of these blocks," Daly added.

The company will hold a 100% stake in the blocks; however, ANCAP will have a right to participate of up to 30% in any discoveries.

2D and 3D seismic acquisition will be carried out on the blocks during the initial three-year exploration phase of the contracts and drilling work is expected to begin in mid-2013.