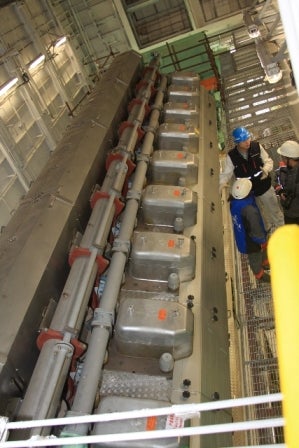 The vessel, which will begin operations in the oil fields offshore of Brazil in 2013, was tested at the Cosco shipyard in Dalian, China.

Powered by Wärtsilä’s 50DF dual-fuel engines, it is said to be the first such vessel to utilise gas engines to generate more than 100MWe of power.

Dual-fuel engines will enable the ship to run on treated well gas or treated crude and marine diesel oil (MDO), reducing the operating costs significantly, allowing the vessel to travel without any MDO.

In addition, the gas-fired power solution installed over the vessel is expected to reduce carbon emissions by about 93,000 tonnes per year, compared to other conventional technologies, said Wärtsilä.

Wärtsilä has provided a turnkey package for the P-63 FPSO vessel as part of a contract awarded by Brazil-based QUIP.

Located in block BC-20 of the Campos Basin, Papa Terra field is a heavy crude oil field, which lies at a water depth of 1,190m, about 110km offshore Brazil. Petrobras operates the field with a 62.5% interest, while the remaining 37.5% interest is held by Chevron.

Image: Wärtsilä has completed load tests of a P-63 FPSO vessel for the offshore oil and gas industry. Photo courtesy of Wärtsilä.