Global ABS capacity is poised to see considerable growth over the next five years, potentially increasing from 11.38mtpa in 2020 to 14.51mtpa in 2025, registering total growth of 27%.

GlobalData’s latest report, ‘Global Acrylonitrile-Butadiene-Styrene (ABS) Industry Outlook to 2025 – Capacity and Capital Expenditure Forecasts with Details of All Active and Planned Plants’ states that around 11 planned and announced plants are slated to come online, primarily in Asia and the Middle East.

Within Asia, China has five planned propylene capacities, with a total capacity of about 2.60mtpa by 2025. The country is expected to spend a capital expenditure (capex) of $2.46bn. Major capacity additions will be from a planned project, Shandong Yulong Petrochemical Longkou ABS Plant.

The Middle East has one planned project. Jam Petrochemical Company Assaluyeh ABS Plant contributes 0.20mtpa by 2021. The capex for the plant is $0.08bn. 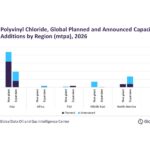 Ineos, Shandong Yulong Petrochemical and China National Petroleum will be the top three companies globally in terms of planned and announced capacity additions over the upcoming years.