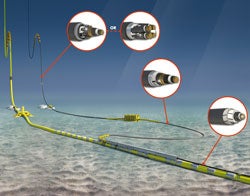 Global cable industry expert Nexans has been awarded a €25 million contract by seabed-to-surface engineering and construction services provider Subsea 7 to design and manufacture the direct electrical heating (DEH) system for the subsea pipelines serving the Lianzi oil field development located offshore between Angola and the Republic of Congo. The Lianzi field is operated by Chevron Overseas (Congo) Limited.

Subsea 7 takes Nexans DEH system deeper than ever before for Chevron’s Lianzi projectThe Lianzi fields tie back to the Benguela Belize Lobito Tomboco (BBLT) platform located in Angola Block 14. With a water depth between 390 and 1,070 meters, this will be the world’s deepest DEH system.

The contract with Subsea 7 covers the delivery of a complete DEH system, including DEH Riser Cable, Armored Feeder Cable, a 43 km long Piggyback Cable and all associated accessories for connection to the pipeline that will connect the Lianzi Development Project subsea facilities with the BBLT platform. The Piggyback Cable incorporates Nexans’ field proven Integrated Protection System (IPS).

Direct electrical heating (DEH) is a technology for flow assurance, developed to safeguard the wellstream through the pipeline to the platform. Alternating current (AC) transmitted from the DEH cable runs through the steel in the pipe, which heats up due to its own electrical resistance. By controlling the current, the pipeline inner wall can at all times be maintained above the critical temperature for wax and hydrate formation. The DEH system eliminates the need for chemical injection, pressure evacuation or other flow assurance methods that might have environmental or operational challenges. DEH allows the pipeline to be operated in a cost efficient and environmentally safe manner.

"This latest project with Subsea 7 is a further confirmation of Nexans’ position as the prime supplier for the development and implementation of DEH systems," says Eldar Ystad, Sales Manager DEH systems, Nexans. "Over the past 15-20 years, Nexans has supplied 19 out of the 20 pipelines operating with DEH systems."

The cables for the Lianzi DEH system will be manufactured at the Nexans factory in Halden, Norway, for delivery during the summer of 2014.