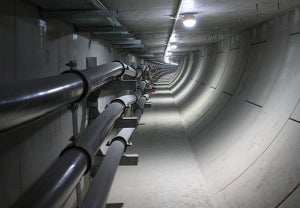 The extension of Shanghai’s state power grid will be supported by a new 500kV XLPE (cross-linked polyethylene) cable system to be supplied by Nexans.

The €23m contract was awarded by the Shanghai Municipality Electric Power Company (SMEPC) of State Grid Corporation of China (SGCC). Nexans will supply 45km of state-of-the art XLPE cables and the accompanying accessories as part of the contract.

The new power link, between the Baoshan district and Yangpu district, will be the second 500kV XLPE installation supplied by Nexans in Shanghai. Nexans will design, manufacture and install a 15km circuit in an underground tunnel, connecting Yanghang station to Hongyang substation.

This will be Nexans’ fourth 500kV project in China.

In 2009, Nexans delivered 51km of XLPE cable as part of the Shibo project operated by SMEPC, 9.4km XLPE cable for Guandi Hydro Power Project by ERTAN. The company also supplied a similar circuit (20km) as part of the Haidian project in Beijing in 2014.

Nexans land high-voltage executive vice-president Philippe Gastineau said: "This new contract in Shanghai reinforces Nexans’ position as the leading solution provider for 500kV inner-city grid reinforcements. Having worked with SMEPC on the Sibo project, we are looking forward to continuing our relationship."

The Hongyang project is expected to be completed towards the end of 2016.