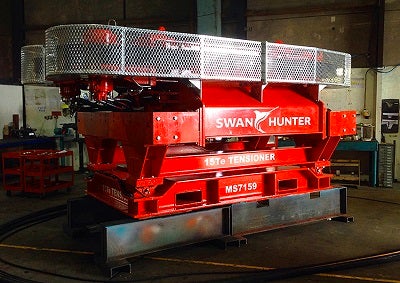 The equipment was delivered by Motive Offshore Group. The tensioner is supplied with a dedicated electrical HPU, and has an open PLC control system that allows it to be synchronised with other flexible and cable lay equipment including carousels, reel drive systems and spoolers. The horizontal two track configuration is suited for cable, umbilical and pipeline products.

Swan Hunter package manager Hamish Cullens commented "We are very pleased to take receipt of the Tensioner from Motive, which has been successfully delivered safely, on time, and to standard. We now look forward to putting it to work on its first scheduled project."

In addition, Swan Hunter have awarded Motive a contract for the design and build of a 450Te Reel Drive System. The reel drive system will be a major addition to our rental pool of flexlay installation equipment.

The towers have a unique jacking system that allows the hub drive to accommodate a range of reel OD’s from 5m to 11.4m without the need for packing frames. The system also incorporates a skidding track system for multiple reel operations. The equipment is due to be delivered in December 2016, and will be operational in January 2017.

Motive Offshore sales and operations director James Gregg said: "The 15Te tensioner marks the completion of our first collaboration with Swan Hunter. Work is also progressing well on the 450Te Reel Drive System which is one of the largest projects in our company’s history and is on track for completion by the end of the year. We are proud to be part of what is proving to be a successful partnership between the two companies and are looking forward to seeing the equipment out operating in the field."