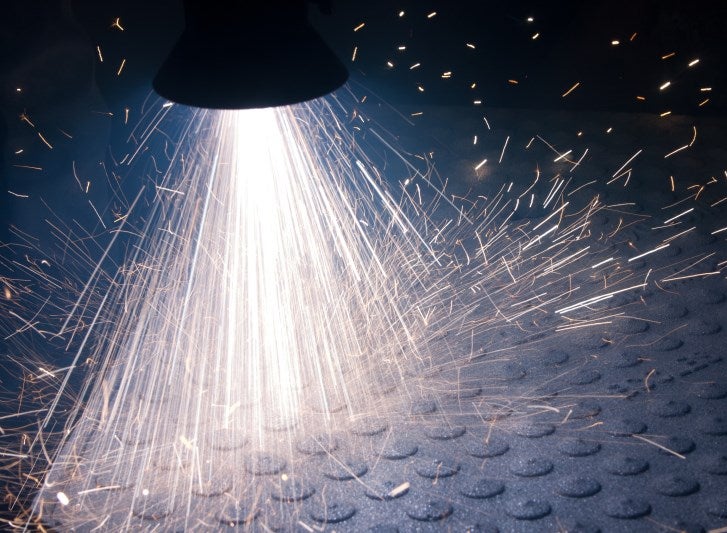 Metallisation’s 28E ARCTEC is a durable, non-slip coating ideal for application on steel floors, decks and panel surfaces across a diverse range of industries, from train steps to oil platform worksites.

Traditionally, steel structures are hot dip galvanised, or painted, to protect against corrosion. The disadvantage of hot dip galvanising is that the surface can become slippery and it does not easily accept paint without the need for special primers.

Painting this type of surface, which is sometimes applied with grit inclusions, also has its disadvantages. The surfaces can degrade quickly in heavy use, resulting in corrosion and an increased slip hazard.

Many large steel structures, including oil platforms, refineries and bridges, have been routinely protected against corrosion by thermal spray aluminium (TSA), zinc or an alloy of the two. While providing unrivalled corrosion protection in very aggressive corrosive environments, pure TSA is not durable enough to prevent long term wear on floor plates.

Ideally, steel structures need a durable coating that protects against both slip and corrosion and that’s exactly what the Metallisation 28E ARCTEC coating does.

28E ARCTEC coating is a thermally sprayed coating that can be applied with a rough texture and has excellent non-slip properties, while being extremely hard and resistant to wear. The new coating provides:

The resultant coating is corrosion resistant and because of its durability, site owners can be confident that once applied, they can forget rust or slipping for many years.

To prove the durability of this heavy duty coating, Metallisation has completed many tests in the development of 28E ARCTEC wire and coating. These included non-slip, durability and corrosion testing.

28E ARCTEC coatings have been tested for non-slip and durability using a Pendulum Coefficient of Friction (CoF) tester, in accordance with independent British Standards and UK Health and Safety Executive (HSE) guidelines.

These guidelines suggest that a floor coating with a Pendulum Test Value (PTV) greater than 36 will have a low slip potential in pedestrian areas.

To test the coatings, the plates were sprayed to produce a surface texture that would wear well, but not too rough for pedestrian surfaces. If the surface has too much grip in pedestrian areas, it can cause a trip hazard.

To prove the durability of the coating, the coated plates were walked on by a standard shoe on a robotic walking machine. The plate was rotated after each step to simulate walking in a straight line and around corners.

Testing in dry conditions achieved similar results, with a dry PTV of 80 down to 64 for unsealed plates and 72 down to just 68 on the sealed plates.

The 28E ARCTEC coating has also undergone a range of accelerated corrosion testing. This offers a comparison of the performance between the new coating and 99.5% aluminium.

The salt spray tests were performed in accordance with ASTM B117. The test results confirmed that the corrosion protection offered by 28E ARCTEC coating was comparable to 99.5% aluminium.

These results give the confidence that the coating will provide the same high standard of corrosion protection that aluminium has been doing around the world for several decades.

The 28E ARCTEC coating has also proved to provide acceptable non-slip protection in line with the Highways Agency standard HA104. The HA104 standard states that where chamber tops are likely to be subject to traffic including vehicles, cyclists, pedestrians or equestrians, the non-slip coating must provide an adequate level of skid resistance.

Measurement of in-service skid resistance potential is measured by means of a ‘Polished Skid Resistance Value’ (PSRV) in accordance with BS9124.

Following the successful testing, the 28E ARCTEC coating is currently in use on Devon’s roads and is the preferred solution for a south coast contractor for its safety plates. The safety plates are steel guards used to cover working trenches on roads and pavements to provide a safe crossing area for traffic using the area.

Both the manhole covers and the safety plates must adhere to the Highways Agency non-slip standard HA104.

Another example of the 28E ARCTEC coating in use can be seen on a twin-platform, offshore LNG platform installation, which has an inter-connecting bridge.

Following extensive evaluation of non-slip coatings, 28E ARCTEC wire was chosen as the preferred coating to be applied to the bridge deck surface, because of its non-slip durability and corrosion protection.

28E ARCTEC coating was also chosen to treat the ramps used by forklift trucks to load and unload containers.

The ramps can be very slippery in wet conditions and are often salt treated in winter. After one year, it was reported there has been no visible rusting of the steel substrate.

For more information about this or any other Metallisation product, please contact the company via the enquiries form.

Metal Spray Supplies is a specialist provider of metallisation and other coating solutions, able to offer expert assistance and advice regarding a comprehensive array of...