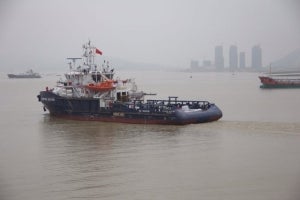 The MMC 950 designed AHT was constructed at Fujian Mawei Shipbuilding, Fuzhou, SE China. With an LOA of 50m and a beam of 15m, the ship has a special low air draft to facilitate her ability to transit beneath the low bridges encountered at offshore facilities. Having a Bollard pull in excess of 60t she will be a very useful addition to the Stanford fleet. Named the Stanford Mustang, she is now enroute to the Middle East, where she will soon commence her employment on a long-term charter with an oil major.