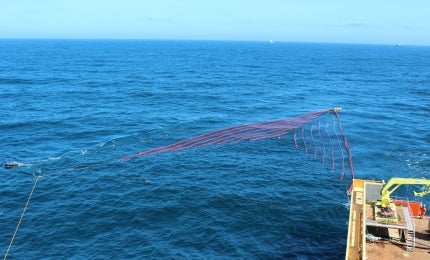 Established in 1952 with more than 1,000 employees in nine countries, Egersund Group is one of the world’s leading producers of equipment such as pelagic trawls and fish farming nets for the fisheries and fish farming industries.

The Marine Oil Spill Sweeper is a multi-barrier system consisting of deflectors in a herringbone pattern for concentrating the oil in the water. The oil is guided to the middle of the structure and then towards the rear end into a pump or collection unit for the storage and transfer of the oil back to the oil recovery vessel.

Oil spills and potentially large-scale environmental disasters represent a daily challenge for the shipping and oil and gas industries worldwide.

The MOS Sweeper is a complete single vessel oil containment and recovery system, which can chase, collect and pump oil during operation from the ocean back to the towing vessel. The system uses a paravan and is very easy to maneuver. It can cover a large area in a short period of time with its 50m swath width.

They can be deployed and ready to use in less than 30min, which ensures a fast response during an emergency. The size of the sweeper can vary from 15m to 50m and the system can be delivered with an oil collector, instead of a pump.

Depending on its size, the MOS sweeper can be operated from a number of different vessels, such as offshore supply, fishing, coastguard and standby vessels.

The concept behind the MOS sweeper

Norway is one of the few countries that benefits from full-scale, offshore oil-on-water exercises organised annually by the NOFO. These events provide Egersund Group with a unique knowledge base for testing, understanding and improving products and oil spill preparedness.

The MOS Sweeper have been tested over several years, in Ohmsett NJ, Sintef, and at sea under realistic weather and wave conditions and has proven to function at a much higher rate than the current systems, also in heavy seas.

An oil-on-water 2013 report commented on the MOS sweeper, as saying: ‘It appeared to collect all the emulsion it came in contact with and led this into the reduction channel at the front of the skimmer using the SeaQuest pump.

‘A significant recovery rate was recorded on the oil recovery vessel with high oil content in the liquid flow to the storage tank.’

The technology behind Egersund Group’s V-shaped MOS sweeper is based on various maritime principles. Towing at a speed of 4.5k, the system is operated from a single vessel and its design enables a more efficient oil recovery. Additionally, the sweeper can withstand high waves and strong currents at sea.