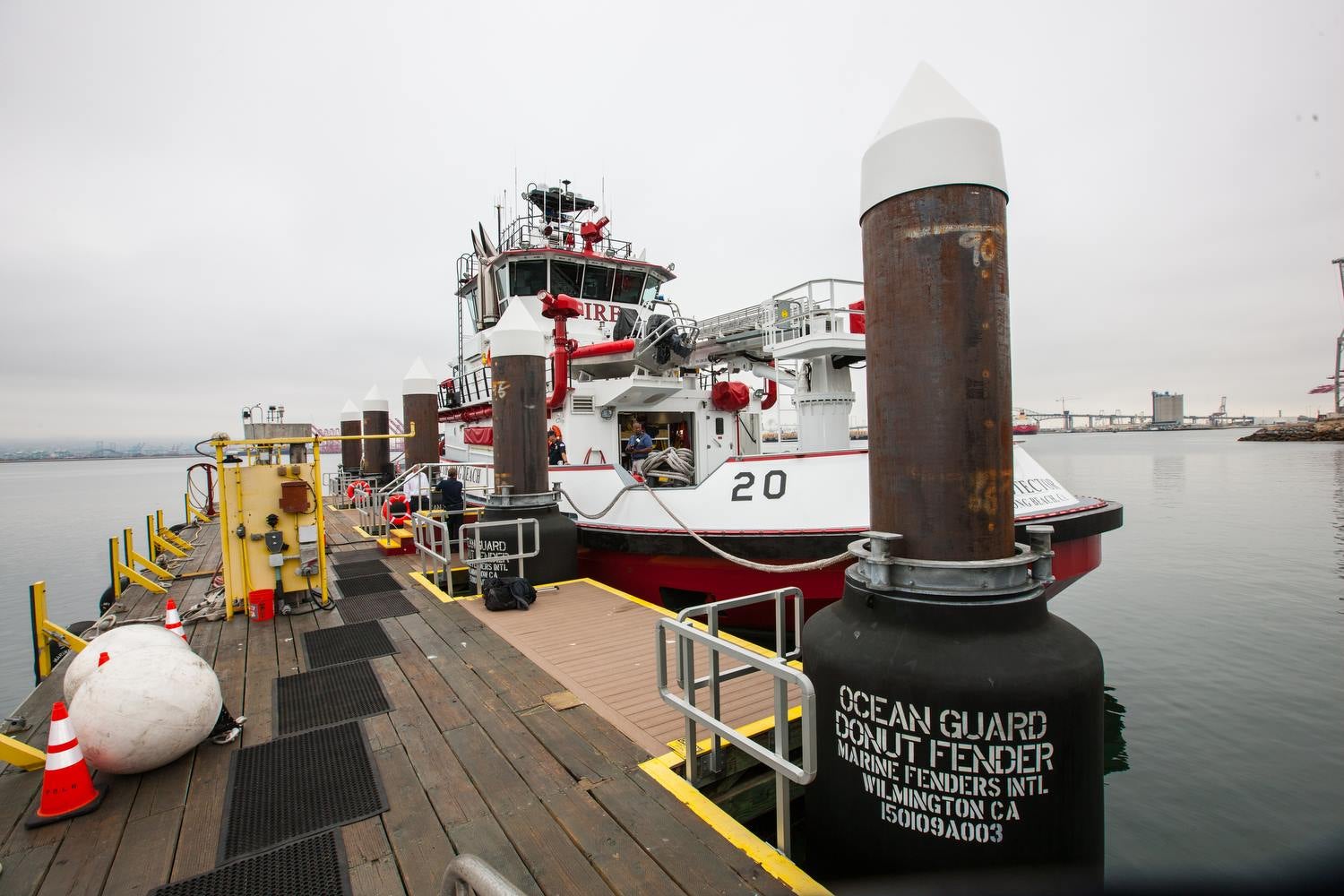 A leader in the marine fendering industry, Marine Fenders International (MFI) engineers have developed the industry’s most versatile and customized donut fendering solutions.

Donut fenders are foam-filled energy absorbing fenders that have an open core in order to freely rotate about a stationary monopile or are mounted on a pier in such a way that they rotate as pressure is exerted by a vessel. Having a vessel roll off the fender nearly eliminates shear forces while making navigation much easier, especially to and from a berth in windy or high-current conditions.

MFI’s Ocean Guard ™ Donut Monopile Floating Foam-Filled Fender is designed to simply slip over a stationary monopile and float at the fluctuating water line. MFI’s internal anti-friction UHMW bearing pads allow the fender to slide around and up and down the pile allowing a vessel to roll along the moving fender enabling the fender to be at the same relative level to the vessel at all tides. When outfitted with an independent mooring crown, this fendering system provides and optimal all-tide mooring solution.

The basic design principle of the floating Ocean Guard Monopile Foam-Filled Fender is to provide an innovative fendering system that absorbs energy, adjusts to tidal fluctuations and eliminates shear forces. The ability of this fendering system to freely ride up and down and rotate around the driven stationary central steel pile even under compression achieves this design goal. The proven performance and versatility of the Ocean Guard Monopile Fendering System make it ideal for even the toughest mooring applications.

MFI sets itself apart by working directly with customers and engineers to provide customized donut fendering solutions unique to every customer and project.

One of these projects is the Fireboat 15 Dock Upgrade at Pier F, Berth F202, at the Port of Long Beach in Long Beach, California, US. Operated by the City of Long Beach Fire Department, two fireboats used to protect port assets and provide safety to the area are berthed at a port fire station on Pier F. Due to increased post-9/11 safety concerns, assessment of the aging currently operated fireboats and the need for more advanced technology to handle larger container ships and port expansion, the Long Beach Harbor Commission requested that the fire department upgrade port fireboat facilities. This included the fireboat dock, which had to be upgraded to include two new, larger 108′ fireboats. Marine Fenders International was awarded the contract to provide fenders for the upgraded fireboat dock.

Berthing design for the new fireboats

For the project, MFI’s Ocean Guard Donut Monopile Floating Foam Filled Fender was chosen to help protect the $50m+ fireboat investment. For the renovation of the fire boat berth, a solution was required that limited reconstruction of the docks, while adding all-tide moorings. MFI’s Ocean Guard Donut Monopile Floating Foam-Filled Fenders with independent mooring crowns were perfect for the task.

The 20ft Ocean Guard Donut Fenders were designed specifically for these fire boats and set in the water to maximize the boats’ contact with the fender, thus reducing the pressure put on their hulls. In a race against time to get out to a fire or coming in from an emergency, the MFI Ocean Guard Donut Fenders allow the fire boats to leave or come back quickly, maximizing contact energy absorption with their high density foam core and ability to roll off the hull, further absorbing the energy beyond a traditional stationary fender.

Sitting on top of the fenders are mooring crowns, which are robust steel structures that slip over the monopile and rest on top of the donut fenders. Each mooring crown is designed to rotate freely due to low-friction UHMW bearing pads and with multiple bollards for the vessel’s dock lines. Because the mooring crown rotates independently of the monopile and the donut fender, movement of the vessel in windy and high-current conditions puts less strain on the dock lines than if they were tied-down to a traditional fixed cleat on a dock or wharf.