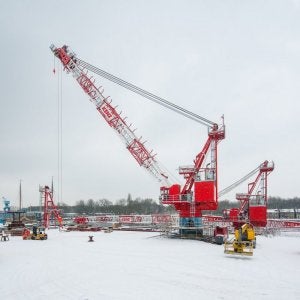 On Wednesday 23 January, Kenz Cranes successfully completed the factory acceptance test (FAT) of the second crane for the Clair Ridge project. The third and final crane for this project is scheduled to be tested in the middle of February. After the last crane is fully tested and commissioned, the three cranes will be transported to Korea to be installed onto the Clair Ridge platforms.

In October 2011 BP and its co-ventures, ConocoPhillips, Chevron and Shell, received approval from the UK government to proceed with the second phase of development of the giant Clair field. The development, called Clair Ridge, involves the construction and installation of two new, bridge-linked platforms, scheduled to be installed in 2015.

Kenz Cranes is a well-known designer and manufacturer of cranes and related lifting equipment for the offshore industry. Using our in-house production, testing, commissioning and...

The offshore division of the Kenz Figee Group is the forerunner when it comes to the design, manufacturing and maintenance of hoisting and lifting systems.