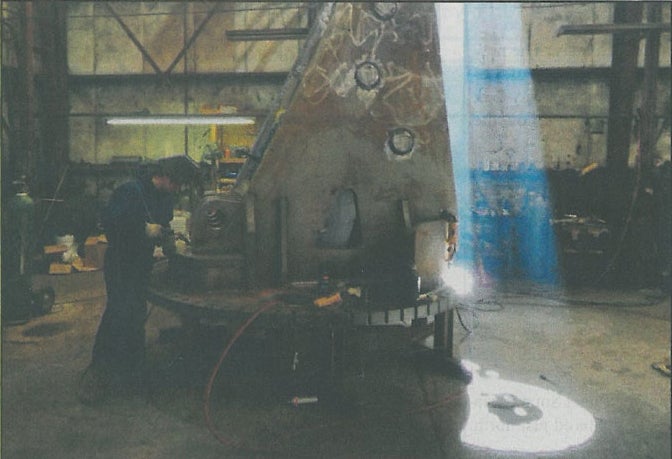 They lift crab pots from the Bering Sea and transport supplies to ships in the Indian Ocean. They withstand salty seas, wind, storms and ice from the Arabian Peninsula to the south Pacific.

Some of the cranes manufactured by the North Pacific Crane Co. in the late 1970s are still lifting and moving gear and supplies throughout the world. And all the fabrication, welding and testing is done out of two nondescript blue buildings along Old State Highway north of Carson.

Carson Hydraulics and Fabrication LLC entered the crane construction business in 1978. In 2004, Joseph Rajkumar of Seattle purchased the company from the family of Carson and set about expanding its already impressive global reach.

NPCC cranes have been purchased by Nanyang Shipbuilding Co. and Guangzhou Lingshan Shipyard of China; by the Bharati Shipyard Limited and ABG Shipyard Limited firms of India; Qatar General Petroleum and by Eastern Maritime Limited of Thailand.

"We have a lot of ties the international market," Rajkumar said.

We do good networking and most of our business is repeat customers. They appreciate the price, service and quality."

Anyone who has watched the long-running ‘Deadliest Catch’ on The Discovery Channel will recognise the company’s name on many of the cranes used to haul up crab pots and other gear.

The Carson shop has three or four projects in the works at any one time. It has manufactured more than 2,000 cranes for nearly four decades. And it will soon be able to produce larger cranes to carry heavier loads, according to Rajkumar.

The company already had an international reach but the Seattle mechanical engineer has been working diligently to increase its presence throughout the world.

"Our long-time customers still return to us for replacement parts and consulting, and still recommend us to new customers," he said.

He and his sales and service teams frequently travel to the Indian subcontinent, the South Pacific and the Middle East as the company continues its efforts to be the preeminent crane construction company This month, he travelled to Singapore, India, Kuwait and Vietnam – something he or other company representatives do about three employees have time for their times each year. Many of the companies he visits are repeat customers.
"Our cranes are very well received in the Middle East, Saudi Arabia, Qatar, Malaysia and Singapore and now, we have opened markets in India," Rajkumar said.

"We are also very well received in the US by the Army Corps of Engineers as well as offshore companies."

He said NPCC constructs 40 to 50 cranes a year in the small and medium crane markets. The company produces the plans and specifications for each crane in its Seattle office on Lake City Way while all the manufacturing and testing is done in Carson.

The company’s engineers have more than 30 years’ experience in designing cranes, using international engineering standards and state-of-the-art software design tools. He said the company has a reputation for delivering excellent products and providing good customer support.

The foundation for a new, 11,400ft² building been poured at the Carson facility. The new facility will be able to accommodate the construction of larger cranes. It also means the crane fabrication shop will need more workers, Shop manager Derek Mathany said. The company plans to add three this year and four in 2016.

The fabrication shop can construct a crane as large as 115t capacity but the new building will allow the company to build 150t cranes.

"We are also going to add other buildings in the future," Rajkumar said.

Mathany said most of the dozen workers live within 10min of the shop. They work nine-hour days beginning at 6am which means employees have time for their families in the afternoons.

One worker has been there nine years while several others have worked six or seven years. He said the most essential personality trait is an ability to get along with others.

"It’s too tight of quarters to argue all the time," he said. "We’re all pretty tight and hang out together."

Rajkumar said the Carson location works well for the company, particularly because of the long-term employees.

"We just stayed with there because the guys are very experienced," he said. "And it’s a nice place to work. We could’ve moved it to Seattle or Tacoma but we like the place."

He visits the shop several times a year to discuss matters with the work crew or monitor progress on the cranes. His son, Vish, who is an engineering graduate of the University of Washington, assists in sales efforts across the globe.

"My son is now into the business and he’s taking over marketing," Rajkumar said.

"We do a lot of travelling."

He said his wife also plays a major role in the company, managing the finances.

The Carson site sits on eight acres with two buildings and a third one under construction. The overhead crane in one of the buildings can lift can up to a 115t crane, though majority of projects range in the 2t to 20t range. Mathany said a smaller, 5t crane can be completed within four days while the larger 115t cranes usually take several months to complete.

BBB has determined that North Pacific Crane Company meets BBB accreditation standards, which include a...

North Pacific Crane manufactures cranes for use in oceanographic survey and research vessels.We have developed...

Mutawa Marine Works LLC and North Pacific Crane Company have been doing businerss for over...

We are please to see that after over a decade, both North Pacfic Crane Company...