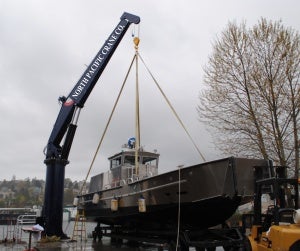 Kvichak Marine Industries, of Seattle, Washington, US, was awarded an American Recovery and Reinvestment Act (ARRA) small shipyard grant in August 2009. The grant funded much of the major equipment associated with the company’s new metal processing facility, Flashmark Tech, which opened earlier this year.

Another benefit of this grant is a new crane for their headquarters in Seattle. The crane is made by North Pacific Crane and has a capacity of 35,000lbs, with a boom length of 31ft and a pedestal height of 15ft. The new crane is located at their bulkhead along the Lake Washington ship canal and will provide Kvichak with the capability of launching and lifting boats from the water at their bulkhead. This will lower the costs of production, expedite sea trial processes and open up their business to repair work that had not been possible before.

BBB has determined that North Pacific Crane Company meets BBB accreditation standards, which include a...

North Pacific Crane manufactures cranes for use in oceanographic survey and research vessels.We have developed...

Mutawa Marine Works LLC and North Pacific Crane Company have been doing businerss for over...