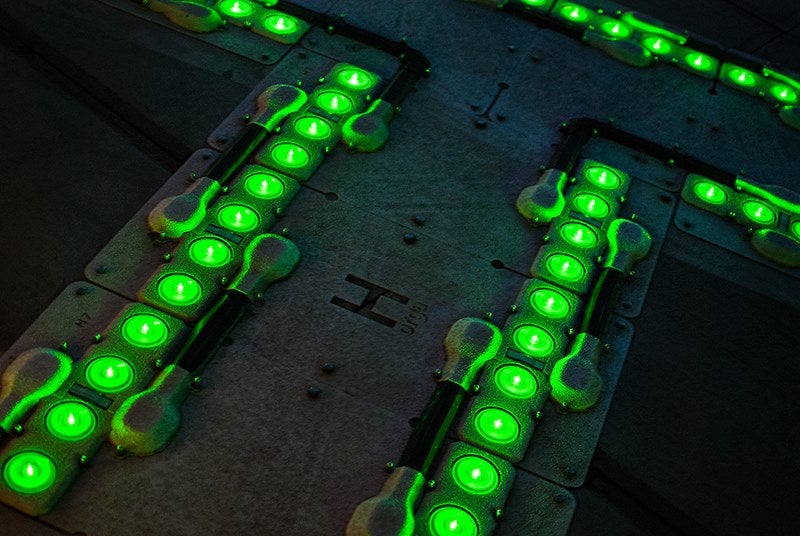 From 2018, the UK Civil Aviation Authority (CAA) is making a new touchdown and positioning system for helidecks mandatory in British waters. In recent years, navigation aid and helideck lighting package provider Orga has installed the new system at various test sites. The results of the tests showed such a great improvement in safety that in February this year the UK CAA decided to make the systems mandatory. A number of countries are expected to follow this example. Orga product group manager Daniel Powell says: "The visibility of the LED-lit Circle-H provides greatly increased safety, particularly in poor weather conditions and for night flights."

From a recommendation to a requirement

In October 2012, after a number of years of research and development, Orga installed the new touchdown and positioning system on an offshore helideck site in the Irish Sea. This is a test site where more than 3,500 helicopter landings have taken place, both at night and during the day in all sorts of weather conditions. In the first few months, the UK CAA already saw so many major advantages of the Orga system that it gave its recommendation that all helidecks on offshore platforms should be fitted with the LED-lit Circle-H. In February, just a few months later, the organisation made this recommendation a requirement. Powell adds: "If you look at the improved visibility, and the benefits of this for safety, this requirement is a logical decision."

The CAA wants all helidecks on platforms in the Irish Sea to be equipped with the new touchdown and positioning system by 2018. Half of the sites must be equipped with the system by March 2016. The requirements and the directives with which the system must comply are set out in the CAP 1077 report that was published recently. At the moment, Orga is the only company that can produce a fully certified Circle-H. Powell concludes: "In order to provide all helidecks on offshore platforms with the mandatory Circle-H before 2018, it is important that customers let us know that they are interested in good time. It is only in this way that we can coordinate the production and installation process properly and ensure that the helidecks are equipped with the new system in time."

Success for Orga at ADIPEC 2016

The Abu Dhabi International Petroleum Exhibition and Conference (ADIPEC) is one of the world's most...

Orga Offshore, a leading global provider of high-performance marine and aviation aids to navigation, has...

Orga is delighted to be returning once again to OECC at the Amsterdam RAI Exhibition...