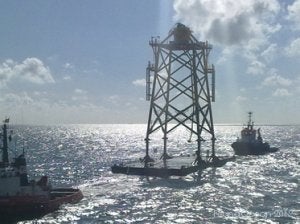 FoundOcean has now completed the offshore foundation grouting at Thornton Bank Offshore Wind Farm Phase II, 30km off the coast of Oostende, Belgium. FoundOcean was contracted to Geosea, the specialist piling and jacket installation arm of the DEME group of companies. The wind farm is owned by Cpower.

Jim Bell, managing director for FoundOcean commented: "This is a very important project for FoundOcean; it reinforces our capabilities in the offshore wind sector."

He added: This comes on the back of our successful grouting operations at the Ormonde Offshore Wind Farm, which we completed in 2010."

The four-legged jackets, designed by OWEC Tower, sit in water depths of between 15m and 20m. They were secured to the seabed by grouting the annuli between the stab-in legs and pre-driven piles. 25 structures were grouted in total: 24 turbine foundations and one offshore transformer station foundation. Ordinary Portland Cement (OPC) CEM I Type 52.5N was used.

"The jackets were loaded out and installed by Geosea, and FoundOcean then completed grouting operations for each structure using its advanced recirculating jet mixer. During the course of the project some 1,500 grout cubes were manufactured for testing characteristic strengths at 24 hours, three days and 28 days," explained operations director for FoundOcean, Paul Burns.

Each jacket leg is equipped with a primary and secondary grout line, terminating on the mid-section deck for ease of access and connection of the grout hose, at EL +20.00m. A tertiary grout line, fitted with a FoundOcean male subsea grout connector terminating above the pile stopper, is provided for connection of the grout hose by ROV in the event that contingency grouting of the annulus was required.

The project, which mobilised in May 2011, uses the same highly efficient pre-driven piling technique as used on the Ormonde Offshore Wind Farm where FoundOcean completed grouting operations for 31 jacket foundations in the Irish Sea in October 2010.