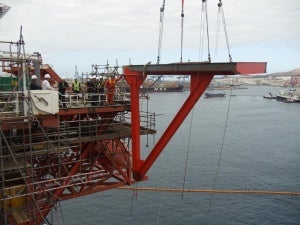 In April 2012, global maritime and offshore engineering group Harris Pye revealed that it had taken on £10.5m of offshore projects in just that month alone. This week – less than a year later – group managing director Mark Prendergast announced that the company turned over a total of £60m in the sector during 2012, and is expecting that figure to rise to at least £95m by the end of 2013.

Given that total turnover went up to almost £100m, it’s evident that Harris Pye is indeed continuing to go from strength to strength in all its markets, and in particular the offshore industry, just as Prendergast claimed in April last year.

"Naturally I’m delighted that we’ve made such rapid progress in the offshore market," Prendergast says. "I’ve no doubt that our success is due to our tight project management and turnkey packages, both of which are very attractive propositions to oil and gas companies."

Group technical director Chris David explains, "Harris Pye is unique in that it is a one-stop-shop offering a full range of repair, upgrade and conversion services – from initial design through to installation – on almost any type of project. Whether it be replacing a damaged helideck onboard a FPSO whilst it’s in-situ, or installing new decks on an alongside semi-submersible; our specialist teams can complete all aspects of the project from start to finish; on-time and sometimes even ahead of schedule. This naturally gives a significant financial benefit to our customers."

One of last year’s projects was for Seadrill, who gave Harris Pye permission to film for a day whilst working on the West Aquarius in Las Palmas. The resulting video can be viewed on Harris Pye’s website, YouTube channel and Facebook page.

Testament to the company’s global success, dignitaries from around the world attended the event, including His Excellency Dato’ Sri ZakariaSulong, High Commissioner of Malaysia, the UK’s Brazilian Trade Counsellor Rodrigo Santos and the Royal Thai Consul for Wales Theo Coliandris.

Prendergast summarises, "In order to secure our position as a growing player in the offshore market, and to continue our growth in it, it’s imperative that we have the necessary facilities and expertise. Yes, opening three new sites in two countries within three months is fast – but it’s no stretch for us, and it means that as always, Harris Pye will be globally available to meet our clients’ needs, 24/7."

Harris Pye undertakes in situ, alongside and dry-dock surveys, repairs and upgrades of a variety...

Harris Pye takes on over £10.5m Worth of Offshore Projects in One Month

The Harris Pye Group has announced that it has secured its first order for the...