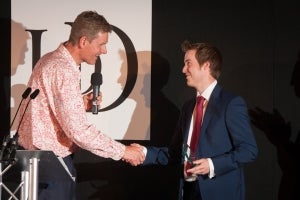 Arc Energy Resources director Andrew Robinson has won the director development category in the 2014 Institute of Directors (IoD) South West regional awards in the UK. Andrew, aged 28, was the highest scorer in the SW IoD Certificate in Company Direction, which encompasses the core knowledge and awareness necessary to function effectively as a director.

Commenting on winning the award Andrew says: "This is a great boost, as the business celebrates its 20th anniversary this year. I have worked here for six years and have been a director for just under a year. The first thing I did was enrol on the IoD director courses so that I would know what I was doing. I was really pleased to pass, especially when the IoD told me I was one of the top scoring directors."

Arc Energy Resources was founded in 1994 by Andrew’s father, managing director Alan, and his mother Rosemary is also a director. Since joining the business Andrew has been working in a variety of roles, including procurement and scheduling, aiming to learn as much as he can about the firm. The company is a specialist in weld overlay cladding services, providing protection against corrosion and wear for equipment in the oil & gas, nuclear and processing industries. It is currently on target for a record year and has just signed a lease for larger premises. The expansion will include a dedicated research and development facility as well as plans to expand its involvement in the UK’s resurgent nuclear power industry.

The South West’s IoD Director of the Year Awards seek to highlight outstanding business people. They aim to celebrate achievements across the region, bring all parts of the enterprise community together and focus UK-wide attention on South West success.