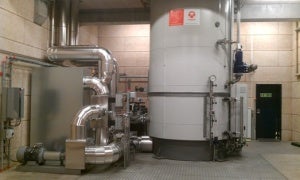 Parat’s electrode boiler’s ability to rapidly manage fluctuations in renewable energy sources has brought swift uptake in Denmark since 2011. As the Norwegian company launches in Germany, Parat reflects on the promise of efficiency its solution offers to Europe’s smart electricity grids.

Germany’s appetite for renewable energy dwarves other European states, accounting for 20% of total consumed within the EU in 2011, according to Eurostat. Its potential for growth has become even more marked, following the move away from nuclear power. However, key obstacles remain beyond the political dimension that will test financial and technical resolve.

The European Commission’s ‘Energy Roadmap 2050’ envisages European greenhouse gas emissions at 80%-95% below 1990 levels by 2050. As politicians across Europe focus on austerity, the significance of grid capacity in the mix needs particular emphasis if such aspirations are to be met.

For renewables, the crux of the matter lies in balancing the peaks and troughs of energy production across the continent. The Heinrich Böll Foundation recently observed, "Even today, on peak days of wind energy production in Denmark, Germany, Spain and Portugal, supply can exceed domestic demand. Currently, the ability of the grid to export electricity to neighbouring markets is partly capable of buffering that effect, but as the share of renewable energy grows, additional measures will need to be taken."

The "additional measures" refer to smart grids that are intelligent enough to nurture the emergence of the ‘prosumer’ – electricity consumers who are also producers. The prosumer feeds unused electricity from renewable sources into the grid. Smart grids manage the voltage fluctuations and maintain stable power supply.

During the last month, PARAT Halvorsen has collected four new boiler plant orders from the...

PARAT Halvorsen has been awarded new boiler plant contracts for two freezer trawlers to be...

Visit the PARAT Halvorsen booth at the NOSCA pavilion, at the International Oil Spill Conference...

Parat Halvorsen AS has recently signed an agreement with Environmental Marine Partners (Empus) based in...