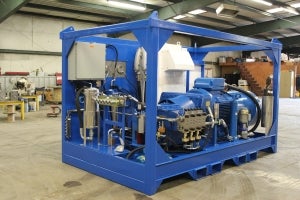 Off the west coast of Africa investment in subsea oil exploration is growing year on year, which is driving the development of more and more subsea structures as part of the production infrastructure.

New fields require the installation of umbilical systems to connect the structures together and in order to ensure efficient and reliable performance, the umbilical system needs to be tested and cleaned at regular intervals. This process has been streamlined with the introduction of a new test rig developed by RMI Pressure Systems and delivered to Duco UK as part of an initiative to improve the speed and reliability of the commissioning process.

As the known reserves of oil and gas diminish, companies involved in the industry continue to search for and exploit potential new sites. However, this is an extremely expensive process, requiring huge levels of investment which must deliver more efficient methods and equipment to ensure a return on investment.

Angola is the second-largest oil producer in Sub-Saharan Africa behind Nigeria, and recent exploration suggests that Angola’s reserves may be larger than initially estimated. Successful exploration in Angola’s pre-salt formations continues to drive optimistic oil production forecasts for the country, with further exploration to be undertaken in deep water, 1,200m and beyond. One of the major players will invest $3bn a year to the end of the decade in Angola alone.

With this investment comes the requirement for more reliable and efficient equipment to ensure that the development of each site is as cost effective as possible. Duco UK, a leading manufacturer of bespoke umbilical products based in Newcastle, UK, found that using their own test equipment, rather than contracting the work out, was not only more cost-effective but also provided more flexibility for customers.

Due to the critical nature of the systems and valves which are controlled by the hydraulic umbilicals throughout the subsea networks, it is essential that the hydraulic fluid be cleaned to the required specifications. The lines and connections must also be regularly checked for leakage to ensure that they operate correctly and with the necessary reliability and efficiency. In order to carry out the cleansing and checking procedures a test rig is required which is capable of flushing out the entire umbilical length and submitting it to a pressure test.

Having already developed a new test rig for use in offshore applications, RMI was approached by Duco UK to develop a similar rig for onshore use, to be delivered to another division operating in Angola. Having previously delivered a unit designed to meet the stringent offshore regulations, RMI was able to use this design as a basis for the new test rig, which would incorporate its Trimax S250 high-pressure pump.

The new test rig had to be enclosed in a custom steel framework which would fit inside a standard cargo container and allow for it to be lifted by a whilst also acting as protection from occasional knocks. The design needed to deliver a system capable of producing pressures up to 15,000psi (1,035bar) with flows between 3gal/min and 15gal/min (11l/min to 56l/min). Achieving these figures would reduce the overall time required to fill, flush and pressure test the umbilical system, which in turn would reduce the cost of installation and commissioning.

The Trimax range of crankshaft-driven, reciprocating pumps provides high efficiency pumping at pressures up to 1,380bar and flows up to 610l/min, delivered by three piston, crankshaft driven, positive displacement pumps. Controlled by a Danfoss variable frequency drive (VFD) and Omron PLC, the characteristics of the RMI test rig allows it to be used for both the filling / flushing operation, as well as the high-pressure testing; which immediately reduces the overall testing time, thereby reducing overall costs.

RMI marketing manager Mike Sherman: "In the past, Duco had contracted out the task of testing and flushing its umbilical systems, but there was a requirement to bring these operations back ‘in-house’, which would allow greater control over procedures and documentation. Having delivered the first test rig on time, despite a very tight schedule, we were asked to build a second unit based on our proven design.

"The umbilical systems are the lifelines for the subsea structures so ensuring they are properly tested is very important and we have enabled Duco to deliver substantial savings in time and money when it comes to complete testing and flushing operations."

The test rig also required the ability to filter the fluids being used in the test procedure to ensure the umbilical pipes were not contaminated. The filtration package required 3 micron filters to be installed on both the suction and the pressure return sides of the main oil reservoir to prevent any contamination during the flushing procedures. The reliability of the package is further enhanced by the installation of the RMI pump health monitoring system, designed to alert operators to any potential issues with oil temperature and pressure.