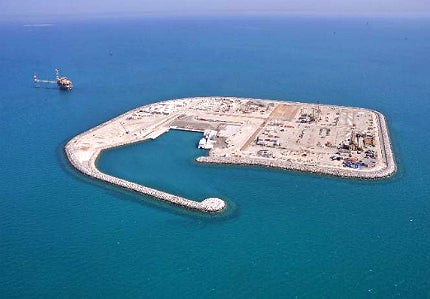 Breaking traditional conventions of offshore oil and gas production, Zakum Development Company (ZADCO), in 2009, decided it would construct a collection of artificial islands amid the Arabian Sea to increase production at its Upper Zackum field offshore Abu Dhabi.

ZADCO, working on behalf of Abu Dhabi National Oil Company and in conjunction with Exxon Mobil, abandoned its original plan for 25 Wellhead Platform Towers at the field, together with hundreds of kilometres of new flow lines, and opted for the artificial islands strategy instead.

Though not an entirely new concept to the industry – they have been used off the cost of California and using ice in Alaska – artificial islands constructed for drilling purposes remain extremely rare and have never been executed on this projected scale before.

Switching strategies is a bold move, but what benefits can ZADCO hope to reap from using man made island structures instead of conventional steel rigs?

"Artificial islands constructed for drilling purposes remain extremely rare and have never been executed on this projected scale."

To build islands sand must be pumped from the bottom of the seabed, a process known as dredging. It is then used in constructing the base of the islands.

"The richness of the sea bottoms for establishing islands is particularly unique, and it just so happens the technology to develop islands in that area is fairly robust," he adds.

With localised expertise – the dredging contract for Upper Zakum went to Abu Dhabi’s national dredging company, National Marine Dredging Company – and materials, islands are a most cost-effective alternative to steel rigs that have to be imported and constructed with outside expertise.

Islands may also make operational costs cheaper, suggests Jean-Paul Boyer from Pentair, commenting on an online discussion, he says: "Running an installation on ‘firm land’ is less costly than running an offshore array of several platforms."

Sigbjørn Sangesland, a professor at the Department of Petroleum Engineering and Applied Geophysics at the Norwegian University of Science and Technology, cautions, however, that islands may only be beneficial for large reservoirs.

"I would assume if you have a small reservoir it may be more economic to put another platform on the location," he says.

Water depth is another key issue when considering artificial islands as opposed to steel rigs.

The Upper Zakum field area is in shallow water with a depth ranging from six to 13 metres, ideal for ease and reasonable cost of construction.

"To build an artificial island In deep water will require a lot of material. I would assume in deep water it would be very expensive and impractical," says Sangesland.

This is a feeling echoed by Adams, who says artificial islands for oil and gas production wouldn’t work in deep water, and this is why they are used less frequently than steel rigs.

"You would have to have too much soil. In deep water the use of different types of steel platforms and concrete platforms is more appropriate," he says.

A key reason ZADCO has opted for artificial islands is to "improve long term reservoir recovery," according the company, and to extend its drilling reach from 10,000 to 30,000 – 35,000 feet using Exxon Mobil’s extended-reach drilling (ERD) technology, as well as Maximum Reservoir Contact (MRC) technology.

Drilling from artificial islands offers many advantages for this, as well as some technical challenges.

"There are so many positives that whatever drawbacks there are to the technical sides, those can be easily dealt with."

Adams says that with a cluster of steel structures you are limited to the amount of wells you can have, whereas with a land base you are able to create a lot more wells – "as many as 200 wells" – which would never be possible with steel rig structures.

ZADCO say: "Many of the wells on the islands will be complex and expensive wells, but their contribution will be much higher than historic Upper Zakum wells. This will improve production performance, optimise the well count and minimise capital investments".

Technically, Sangesland agrees, he says drilling from an island looks like "a good alternative".

"If you have a reservoir to be produced it will be beneficial to produce the reservoir at a high angle or horizontally, because then you will increase the drainage. That is an advantage," he says.

He likens what ZADCO is doing to what is being done at Wytch farm in Devon, UK, where extended reach drilling is used to drill offshore from the land. It has one of the longest producing wells, which has a horizontal displacement distance of 10,728m and a total length of 1,278m.

But he adds: "There are so many positives that whatever drawbacks there are to the technical sides, those can be easily dealt with."

"From an environmental stand point the impact is less," Adams categorically states.

He says this is because building artificial islands involves using natural elements, like sand, and not forcing huge steel structures into the seabed, which have to bear the weight of drilling equipment and other facilities.

Consultancy engineers, Ramboll, which carried out an assessment of the environmental impact of the artificial islands, concluded that construction of the islands would not affect the environment and the existing structures significantly.

One hazard they did identify was some pipelines in the vicinity of the islands were found to require additional stabilisation in terms of concrete mattresses.

However, another environmental and cost bonus of artificial islands is they do not need to be deconstructed. They can be left to erode naturally or turned into something that supports local wildlife.

But the key positive of producing from an artificial island is space. Platforms can only be so big, whereas on an island’s facilities can be spread further out, creating a reduced fire risk.

"If something happens at the facility the people have to get off the steel structures, but on an island there are areas they can go to without having to risk life and limb."

It is also much easier to get into boats to escape a raging fire from a land base structure as opposed to a steel rig, where workers tend to rely on helicopters limited in space to evacuate them from the rig.

An interesting, but limited future

Artificial islands, which have been constructed in abundance around the Persian Gulf for land and leisure reasons, make an attractive option when considering a strategy for offshore drilling for a number of reasons – including space, environmental impacts, safety, cost and number of well heads.

However, these advantages are limited by a number of factors – such as water depth, sand quality and reservoir size – which have, and will no doubt continue to, limit their future use.

Adams believes it’s unlikely this strategy will take off on the same scale as Upper Zakum in other parts of the world.

"There are certain areas in the world where there is shallow water production but you may not be able to dredge the soils to create islands," he says.

Boyer also comments: "I do not think that [strategy] would be seen very often in the future though."

Though more positive, Sangesland agrees the use of artificial islands is dependent on many factors.

Therefore is seems, for now, the countries of the Arabian Sea will continue to enjoy a unique offshore drilling situation that is, as yet, unprecedented anywhere else in the world.

Heavy lifting cranes are integral to offshore construction, and they don’t come much bigger than the Liebherr MTC 78000.

Filling in the gaps in the offshore map: Seabed 2030

Offshore explainer: The Evergreen Marine blockage at the Suez Canal

Shareholders obtain rights to vote on emissions from US oil majors

Filling in the gaps in the offshore map: Seabed 2030

Offshore explainer: The Evergreen Marine blockage at the Suez Canal

17 Mar 2021
Registration is disabled.
We use cookies to ensure that we give you the best experience on our website. If you continue to use this site we will assume that you are happy with it.ContinueLearn more