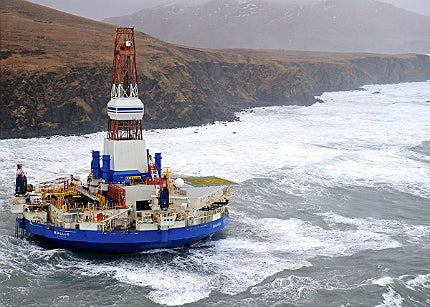 Following repeated operational blunders by Anglo-Dutch oil giant Shell in the Arctic region, Greenpeace International has launched a whistleblowing website, to encourage employees and subcontractors of oil companies involved in Arctic drilling to come forward and expose the sometimes shocking safety practices being employed in one of the world’s most dangerous regions.

Arctictruth.org, which went live on 24 April 2013, aims to challenge unsafe Arctic drilling practices before it’s too late, hopefully averting another Deepwater Horizon-style oil spill in an environment that is even less prepared for it than the Gulf of Mexico.

So far, the response has been encouraging. The website has garnered extremely positive feedback from a range of politicians, employees, NGOs and members of the public, and Ben Ayliffe, head of Arctic oil at Greenpeace International, believes this is only the beginning.

"Our guess is that many people working in the oil industry will have been horrified by the kind of happy-go-lucky attitude shown by companies like Shell in operating in one of the most delicate environments on Earth, and their ethical convictions will be telling them that if they can do something to prevent a major disaster from happening, they should," he said.

Elly Earls sat down with Ayliffe to find out more.

Elly Earls: What are the potential consequences – human, environmental and economic – of oil accidents in the Arctic region?

Ben Ayliffe: The Arctic is acutely vulnerable to large oil spills. Freezing temperatures, thick sea ice, months of perpetual darkness, storm forced winds and dense walls of fog would pose unprecedented challenges to responding to an accident in the icy waters of the far north. Because of this, the impact of a spill in these northern seas would be catastrophic. The lack of sunlight inhibits the breakdown of oil through biological processes and exposure to the elements, meaning that toxic oil lingers, leaving the ecosystem contaminated for decades.

The risks of an accident are compounded by an oil industry that remains completely unable to meet the enormous challenges posed by operating in the Arctic. Despite years of effort and billions of pounds of investment, there is no proven method of cleaning up oil spilled in ice, while the disastrous attempts by Shell to drill in the Alaskan Arctic during the last year have shown that even the world’s biggest energy companies do not have the capabilities to drill there safely.

EE: What prompted Greenpeace to launch Arctic Truth in April?

BA: Shell’s recent experience in the Arctic waters of the Chukchi and Beaufort Seas has been a shambles from start to finish and if it hadn’t been for close NGO and media scrutiny, as well as investigations by the US Government, very little of its dreadful safety practices and repeated operational blunders would ever have seen the light of day.

Shell told the world it had a "world-class" Arctic system in place, but its failures in Alaska made us realise that now is the time to encourage new voices to join this debate – particularly those of employees and subcontractors who are willing to help challenge unsafe Arctic drilling before it’s too late.

EE: Which incidents in the Arctic over the last few years do you consider the most worrying?

BA: The picture that will linger in most people’s minds is that of the Kulluk, Shell’s antiquated drilling barge, beached on the rocky coast of Kodiak Island after breaking free of its towing ships in heavy weather.

"The risks of an accident are compounded by an oil industry that remains completely unable to meet the enormous challenges."

What’s most alarming about this accident is that the harsh weather conditions which apparently caused it are nothing compared to the kind ships can run into at higher latitudes. Yet it took Shell days to regain control of the rig and we still don’t know the full extent of the damage it received.

Beyond this you could argue, with some justification, that Shell’s entire drilling programme proves how worryingly unprepared the oil industry is for the extreme conditions it will face in the Arctic. From drill ships running aground to engine fires and from failed safety tests to criminal investigations, Shell has shown the world it is not Arctic ready. Yet at the same time it appears perfectly willing to cut corners and take huge risks in the scramble to plunder the untapped resources of this pristine region. Together these two make a particularly toxic brew that we are determined to stop before we witness a Deepwater Horizon-style oil spill in the frozen Arctic.

EE: Arctictruth.org encourages employees and subcontractors of oil companies involved in Arctic drilling to come forward and help expose the risks of drilling in the region. How much irresponsible behaviour do you believe goes on under the radar, which the public is not aware of?

BA: It’s hard to say for sure, but I can’t quite believe that every story about Shell’s bungled Arctic drilling programme has yet come to light. Having got so much wrong at almost every level of their operations, from sub-contractor oversight to towing rigs, I think it’s reasonable to assume that plenty of other skeletons remain inside Shell’s Arctic cupboard.

EE: Can you give me some more details on the type of information you are hoping to acquire through Arctictruth.org?

BA: We are looking for information of important public interest relating to the safety of oil drilling in the Arctic, by any company, that might otherwise be kept secret and away from public scrutiny. Right now we have a specific interest in Shell given their recent drilling failures in the Arctic [and], in particular, any information that can shed light on what went on behind the scenes during Shell’s disastrous attempt to drill in the Arctic.

We have asked that people try to provide us with verifiable information, whenever possible, such as photos, videos, letters or email correspondence. All information will be handled with the utmost discretion.

EE: Tell me about some past successes you have had with whistleblowers at Greenpeace.

BA: Greenpeace has a long history of documenting environmental abuses by corporations, and much of it wouldn’t have been possible without insiders coming forward with hard evidence. They include a concerned former whaler tipping the organisation off about wrongdoings in Japan’s ‘scientific’ whaling programme and a disillusioned former employee of a waste recycling site in England, who highlighted that much of the waste was being dumped in Africa rather than being recycled.

EE: What are the challenges of an approach like this? For example, will people want to come forward? How will you convince them to do so and how will you protect their anonymity?

"We are looking for information of important public interest relating to the safety of oil drilling in the Arctic."

BA: Greenpeace International already has a specific Twitter feed that individuals use to provide us with useful information concerning Arctic drilling. More broadly, Greenpeace regularly receives inside information from individuals who want to expose bad practice within their companies across a variety of environmental issues.

We treat this information with absolute respect and use it to challenge those practices in public, while ensuring that our sources are protected. Given both these things we are confident this site will be successful.

In terms of anonymity, we have established a secure way through which whistleblowers are able to submit information. We are also recommending that those with information further protect themselves by downloading the anonymising software highlighted on the website before submitting their information. There is also an option to post information securely.

We have made a clear commitment to protect the anonymity of sources to the maximum extent permitted by the law and will seek to challenge any disclosure order in court. If necessary, employees will go to jail rather than comply with an illegitimate order to reveal a source.

EE: What is the potential impact of Arctic Truth?

BA: Greenpeace has a strong track record of documenting and exposing the risks the oil industry is willing to take with our environment, helping shed light on disasters like Exxon Valdez and Deepwater Horizon. With Arctic Truth we’re aiming to take this a step forward by blowing the lid on the kind of shoddy practices, reckless attitudes and poor decision-making which are often to be found among the causes of disasters such as these.

The idea of drilling the Arctic for oil, however controversial, has conjured up significant support in recent years.