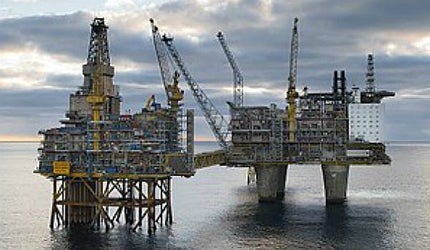 At around midnight on 9 July, just minutes before Norway’s oil and gas industry planned to lock out 6,500 offshore workers in a dispute about pensions, The Norwegian Government finally used emergency powers to end a 16-day strike, forcing employees from the country’s three main trade unions back to work and into arbitration talks in Oslo this autumn.

The strike had been costing Statoil, Norway’s largest oil and gas company, an estimated NKr 115m (£12m) a day since it began on 24 June and the prospect of a lockout was driving up Brent crude prices across Europe. Against this backdrop, Jan Hodneland, chief negotiator for the Norwegian Oil Industry Association (OLF), described the government intervention as "a responsible choice".

"The dispute centres on the abolition of a pension add-on introduced in 1998 for workers who retire at 62."

Hilde-Marit Rysst, leader of Norwegian energy workers’ union SAFE, has a different take on events, however. For her, OLF and the Norwegian Government were simply staring each other down – and labour minister Hanne Bjurstrom blinked first.

"The threat by the oil companies to lockout 6,500 workers was a stand made for one woman," she claims. "If the labour minister had any backbone, she would have said to them ‘I know you are just playing a hand of poker and I’m going to call you. Let me see you shut down your own production’.

"She knew in about three or four weeks Europe would start screaming for oil, and she also knew it would keep flowing from the North Sea. She played the game as far as she could and then, at the 11th hour, the government stopped the lockout because it couldn’t afford the cost.

"Statoil did not take any precautions," she notes. "They did not book any flights, they did not order any nitrogen – they didn’t do anything to suggest they actually thought they’d have to shut down their installations. They knew it was just a game."

This ‘game’ involves workers affiliated to the unions SAFE, Industri Energi and Lederne on one side, and OLF, the Confederation of Norwegian Enterprise (NHO) and the government lead by Prime Minister Jens Stoltenberg on the other – and the stakes are high.

"The strike had been costing Statoil, Norway’s largest oil and gas company, an estimated NKr 115m (£12m) a day."

Norway is the world’s fifth largest oil exporter and the largest producer of oil and gas in Western Europe; it is also responsible for three percent of the global supply of natural gas. The industrial action forced Statoil, in which the Norwegian Government owns a controlling 67% stake, to halt production at its Oseberg Sør and Øst oil fields and on the platforms Huldra, Brage, Veslefrikk A and C and Oseberg C. Total oil production in Norway was cut by 13% and gas output by four percent; OLF estimated the cost to the industry to be NKr2.9bn (£300m).

Rysst believes it was a price worth paying if it means the debate about offshore workers’ right to retire early with a full pension remains at the top of the industry agenda.

The dispute centres on the abolition of a pension add-on introduced in 1998 for workers who retire at 62, three years before the normal age for oil workers and five years ahead of Norway’s official retirement age.

"All the firms involved in those negotiations returned with letters saying that the pension was taken care of now and in the future, but these letters were not taken directly into the tariff agreements," she claims. "Today, OLF says that all pension questions must be solved internally within the companies – while the companies say that this is a problem for the industry."

"Working conditions in the offshore environment are tough and some people are unable to work beyond 57 or 58 years old because of health issues," Rysst continues. "The unions have set aside a £40m ‘social benefits for oil workers’ fund and we have offered to use this money to cover pension add-ons and also to help those workers who maybe want to work just 80% or 60% of the time.

"We have a very good case that the retirement age should be lowered to 62, but OLF sees that many people are still in good health and want to keep working, so it has said no to the add-on payments offered by the unions now, and by companies like Statoil back in 1998."

The bitter dispute in Norway has refocused attention on the Great Crew Change and its potential impact on the offshore industry in general, and the Norwegian energy sector in particular. Roughly half of the global oil and gas industry’s employees are scheduled to retire in the next decade, while a 2011 study by Schlumberger Business Consulting suggested the industry could be facing a shortfall of 5,000 petroleum technicians by 2014.

"In Norway, there are too few oil workers for too many positions," confirms Rysst. "There are also many people living longer in Norway in general. The government wants to reform the pension system and says it is beneficial for people to work as long as they can. We at SAFE also want that, but we also want people to be able to say, ‘I’ve been working for 40 years, now I need a rest.’

"We don’t believe a sum of money that at least gives offshore workers that option is enough to convince most people to retire rather than work. Norwegians like to work."

In Norway, the government can insist on forced arbitration if it believes health or safety is being compromised, or if the failure to act will have a negative impact on the nation’s economy. For once, all sides are in agreement over the latter point. Statoil claims it would lose 1.2 million barrels a day of oil and oil equivalent production during a lockout, which equates to a daily revenue loss of roughly $85m.

"The extra pension was promised and now it is being taken away from us. It is robbery."

With this in mind, and with Norway’s global reputation as a dependable energy supplier hanging in the balance, Rysst weighs up the likelihood of a positive outcome at the latest round of negotiations scheduled for October.

"In Norway, people still think it is good to be a Norwegian oil worker," she says. "You have the salary, you have the free time and the sector will continue to have a good reputation as long we can keep it a good place to work.

"However, if the oil and gas companies and the government can just take our salary and our free time, and make the workplace worse, people will not want to join the industry.

"Of course, we will do what we can legally and we will see what OLF has to say during these two days of negotiation. But if the arbitration talks don’t reach a good conclusion for us, the pressure to strike may return in the future."

Yttergryta is a subsea gas and condensate field located in the Norwegian North Sea. It is situated about 5km north of the Midgard deposit.

Gaupe oil and gas field is located in Blocks 6/3 and 15/12 of production licence 292 in the North Sea, Norway.