To find out about the economic and environmental feasibility of producing methane gas from hydrates, click here or on the image below. 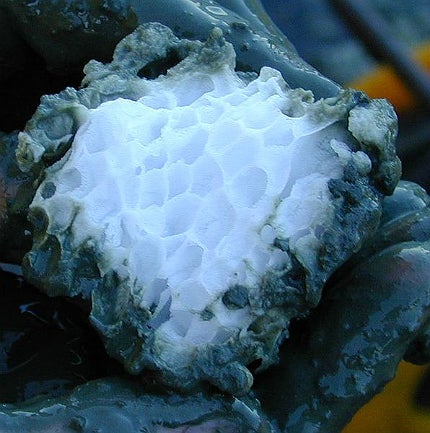 Japan became the first country in the world to successfully extract methane gas from hydrate deposits off its central coast in March.

Methane hydrates, solid structures consisting of methane trapped in water ice – often referred to as "fire ice" – are the world’s largest source of untapped fossil energy and could hold up to 15 times the amount of gas held in shale deposits around the world.

"Japan became the first country in the world to successfully extract methane gas from hydrate deposits."

Surveys suggest Japan has enough methane hydrate for a 100-year-supply, and that the gas could provide an alternative energy source for the country which currently imports for all its energy needs.

But fire ice, lying hundreds of metres below the seabed, is extremely difficult to extract.

Koji Yamamoto, group leader for methane hydrates research consortium MH21 at the Japan Oil, Gas and Metals National Corporation, explains how Japan got over this hurdle, and how the country intends to face the challenges of establishing production methods, reducing costs and easing concerns over potential underwater landslides.

Sarah Blackman: Please describe the process that led to the point of methane extraction off the coast of Japan.

Koji Yamamoto: JOGMEC (formerly JNOC) started the study on gas hydrates in the 1990s. The MH21 research consortium was established in 2001 under funding by the Ministry of Economy, Trade and Industry.

"The gas could provide an alternative energy source for the country which currently imports for all its energy needs."

Under the current programme, we have worked on mainly four aspects; exploration; fundamental research on production technologies; implementation to real fields; and environmental impact assessment. Perhaps only Japan has such a comprehensive plan and research structure.

We have acquired lots of data in the vicinity of the test site in the past decade. The production technology was developed through theoretical and numerical models [and] laboratory experiments, and verified in the Mallik Gas Hydrate site in the Northwest Territories, Canada.

Design and manufacturing of the test system took a long time. EIA related surveys have been done continuously. Integration of such studies brought the recent achievement of the project.

SB: What equipment and technologies are involved in extracting methane hydrates?

KY: We applied the "depressurisation method." It is quite simple. Drill a hole, set an electric submersible pump in the hole, bring the water to the surface in order to drop the water level and hydro-static pressure that lead[s to] gas hydrate dissociation. However, realising this process in shallow sediment under deep-water has a lot of technical challenges.

SB: Now the test production is completed, what is the next step in the programme?

KY: We continue working on the monitoring of the reservoir using monitoring wells and a seismic technique. The next step is the analysis of the obtained data and information. After finishing it, we will start the design of the next test for longer time production.

SB: What kind of impact will methane gas from hydrates have on the global energy mix and Japan’s economy as a whole?

KY: At this moment, it is impossible to assess the value of gas hydrate because production methods have not been established. Maybe the status of the current gas hydrate is [how] shale gas [was] 20 years ago.

Japan consumes plenty of energy, and it is impossible to supply all of the demand from domestic gas hydrates. It can, at least, give an alternative option for Japanese consumers.

SB: What challenges do you expect to face when full production begins?

KY: There are lots of challenges. The highest hurdle is of course the economics.

"It is impossible to assess the value of gas hydrate because production methods have not been established."

Also, environmental impact assessment is very important. We have surveyed the marine ecosystem and impacts by the production test.

SB: Are you concerned that bad weather conditions could falter production in the future and hurt demand?

KY: It is difficult to say about it at this moment. The test was interrupted by sand production. It should be a big issue, but also a common issue in the oil industry. We need to understand the mechanism of the sand production and to know why sand control devices we used did not work perfectly.

KY: It is almost impossible to answer. What I can say is most of the people in the industry could not [have] expect[ed the] current situation of shale gas in just ten years ago.

Methane hydrates could change the face of the energy sector, erasing price differentials and meeting global gas and electricity needs for hundreds of years.