Contracts in the LNG segment registered a decrease in activity by 13% in Q2 2022 with a total of 45 contracts, when compared with the previous quarter’s total of 52 contracts, according to GlobalData’s oil and gas contracts database.

A total of 45 contracts were registered in the LNG liquefaction and regasification segment globally during the quarter, when compared with the last four-quarter moving average of 48 contracts. 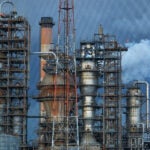 North America took the top position with 16 contracts and a 36% share of the total LNG contracts globally in Q2 2022, followed by Asia-Pacific and Europe with 15 (33%) and eight (18%) contracts, respectively.

Contracts by scope of work in LNG segment in Q2 2022

During the quarter, the majority of contracts in the LNG segment were awarded in the design & engineering and operations & maintenance with 19 contracts each, followed by procurement with 18 contracts.