The terminal, which is accessible by sea, primarily stores crude oil. 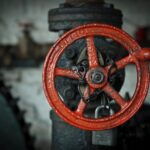