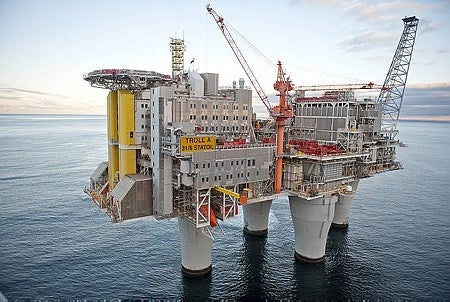 Oil services company Aker Solutions has secured a NOK350m ($61m) contract from Statoil to deliver six subsea trees and a tool package for Troll field on the Norwegian continental shelf.Located in the northern part of the North Sea, about 65km west of Kollsnes near Bergen in Norway, the Troll field contains 40% of the total gas reserves on the Norwegian continental shelf.The contract also comprises a possible option for nine additional subsea trees, including control systems for the oil-producing part of the giant gas field.A subsea tree, an integral part of a subsea production system, is a key technology enabling oil and gas production directly from a subsea well to a processing facility.The tree is essentially an advanced set of valves and is used together with associated technologies to control the well flow.The tool package is needed to operate the fourth rig to be employed by Statoil on the Troll field."The Troll field represents a cornerstone of Norway’s offshore oil and gas production and we are delighted to be awarded such a prestigious North Sea contract," says Alan Brunnen, executive vice president of Aker Solutions‘ subsea business area.The Troll field is the world’s biggest subsea development in terms of the number of subsea wells.The latest contract builds on the earlier delivery by the Norwegian contractor of 100 trees to the Troll field.Aker Subsea is the contract party of Aker Solutions for the equipment deliveries, which will be made from 2012 to 2015. Image: Troll, a natural gas and oil field in the Norwegian sector of the North Sea, lies 100km North-West of Bergen. Photo: Statoil