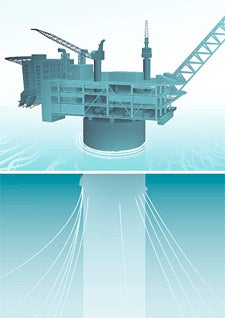 Norway-based oil and gas firm Statoil, in cooperation with ExxonMobil and ConocoPhillips, has selected a Spar platform for the development of the Luva gas field in the Norwegian Sea.

This would make the field, located outside of existing infrastructure at a depth of 1,300m, the first to have a Spar platform in the Norwegian continental shelf (NCS).

The platform consists of a large-diameter, a single vertical cylinder, supporting a conventional deck, with a processing facility and accommodation quarters. It also has two subsea templates with four wells on each, in addition to one satellite template with one well. A permanent crew will work onboard the facility, which also includes a storage unit for condensate, as well as a gas processing facility with a capacity of 23 million cubic metres a day.

In addition, a gas transport concept has been chosen by the Norwegian Sea Gas Infrastructure (NSGI) project that comprises a 480km, 30-36in pipeline from Luva to the onshore processing facility at Nyhamna.

The pipeline will also be connected on to the Linnorm field and tied in to the Zidane field, a connection to Asgard Transport via the Kristin platform will be possible; and there are plans for tying in other fields and discoveries. The pipeline concept selection will require the expansion of the Ormen Lange field’s Nyhamna plant, with plans to convert it into a gas terminal.

Image: The Spar platform consists of a large-diameter, a single vertical cylinder supporting a conventional deck with processing facility and accommodation quarters. Photo: courtesy of Statoil.